Thank you everyone for all your well wishes and encouragement whilst I get over the writing block hump; your charming words truly made my day. Whilst I am slowly getting over this hump I was inspired over the long weekend to do some light baking. I found these little ‘puddings’ online and whipped them up in a flash, though my final result resembled more of a little cake than pudding, hence the name. I’ve also noticed in past comments most readers applaud me on my baking endeavors and share and hate on their own disastrous misadventures in the kitchen. I’m here to be straight, not all my culinary undertakings result in ease and deliciousness, in fact the majority of times things
go heinously wrong; much like this venture in which mishaps were a plenty and I am embarrassingly sharing below.

Don’t be fooled by it’s demure stance, this was no mere feat, it was pretty disastrous actually. It started off all fine and dandy until I started combining the flour, milk and juice. I poured them into my bowl at once rather than gradually and low and behold a grossly lumpy mixture that didn’t want to cooperate and smooth out no matter how much I mixed or yelled at. Yikes. I then had the ingenuous idea to sieve the mixture free of said lumps so I then spent the next 30 minutes trying to do so. It worked a treat until I (finally) realized the process also split and separated the orange rind. So after I had my creamily smooth mixture I had to mix the orange rind back into the batter.

Following that I came to the beaten egg whites and when I moved to combine them I noticed that a small part at the bottom of my jug was still horrifyingly translucent. Double yikes and served me right for being lazy and beating them in the narrow jug that I found in my reach. So I had to remove half of the meringue and continue to beat the rest into submission.

Once the batter was sitting pretty in my ramekins it genuinely felt like things were starting to look up at this stage since my mixture was all light, bubbly and fluffy. But then they took forever to cook through. They browned quick enough so I had to hurriedly wrap the tray in foil to prevent the tops from burning and after 30 minutes they were still way too runny for consumption. They ended up baking for a good 50 minutes and at that stage they developed into a cake like texture rather than a pudding.

Removing them from the ramekins they fell out perfectly and remained in it’s cute rounded shape. Taste wise I didn’t find them relatively sweet nor overpoweringly orange in taste which is an obvious given the constant kerfuffles that ensued over the laboring process. I also found that the rind seemed to clump in the middle too. Unfortunately it didn’t end there either, so after I removed two from their ramekins I got caught up presenting, photographing (as one does these days) and devouring them with my mum and completely forgot about the other four still sitting comfortably in the tray filled with boiling hot water and for those who don’t see the obvious here, they were still partially cooking while they rested inside the water clad tray and in turn split.

These sort of culinary things happen far too often for me but it’s always something I end up laughing and joking about. I also hold a firm belief that these misadventures would make for great television! Now feel free to consult with the original recipe right here if you need, otherwise proceed downwards for the recipe if you’re feeling a tad lazy to click on the link!

Preheat oven to 180°C / 350°F and grease ramekins.
In a bowl combine butter, orange rind, caster sugar and egg yolks.
Gradually stir in flour, juice and milk.
In a separate bowl beat egg whites until soft peaks form. Fold half into the batter and carefully mix until combined. Repeat for the remaining egg whites.
Spoon mixture into ramekins and transfer dishes to a deep baking tray and pour boiling water until ramekins are covered half way.
Bake for 35 minutes or until just set. The baking process may take longer so if you find they are turning brown cover with foil.
Stand for 2 minutes then remove from tray and ramekin.
Serve with a sprinkling of icing sugar and a side of cream or ice cream. 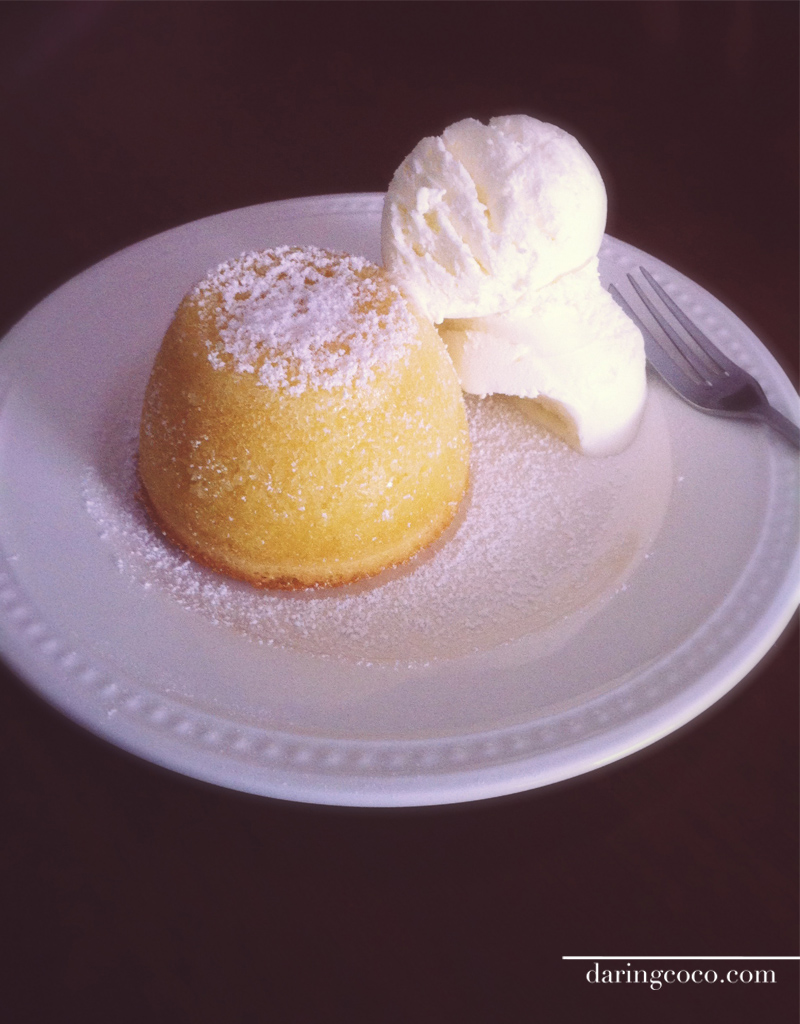 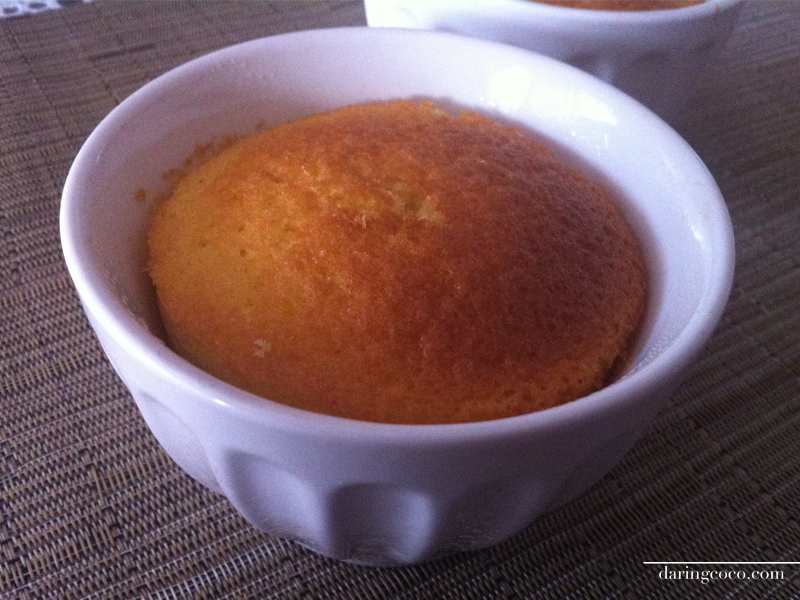 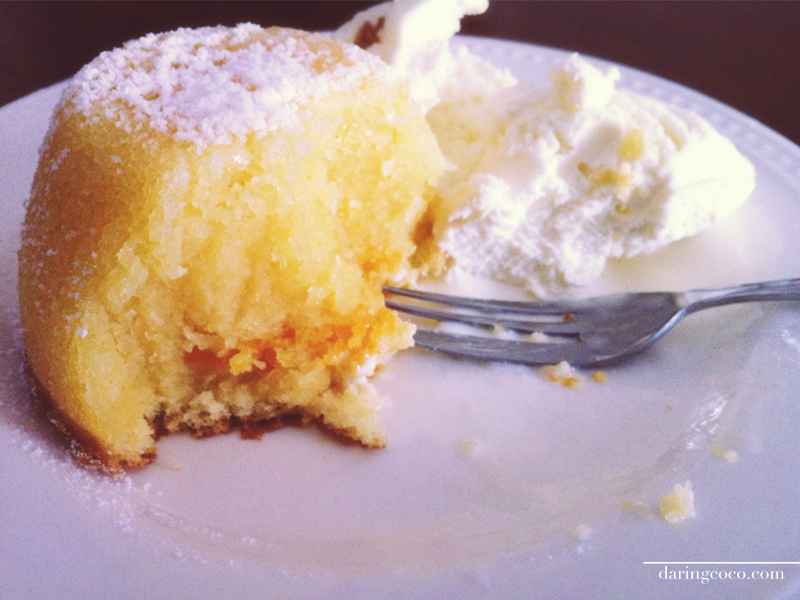 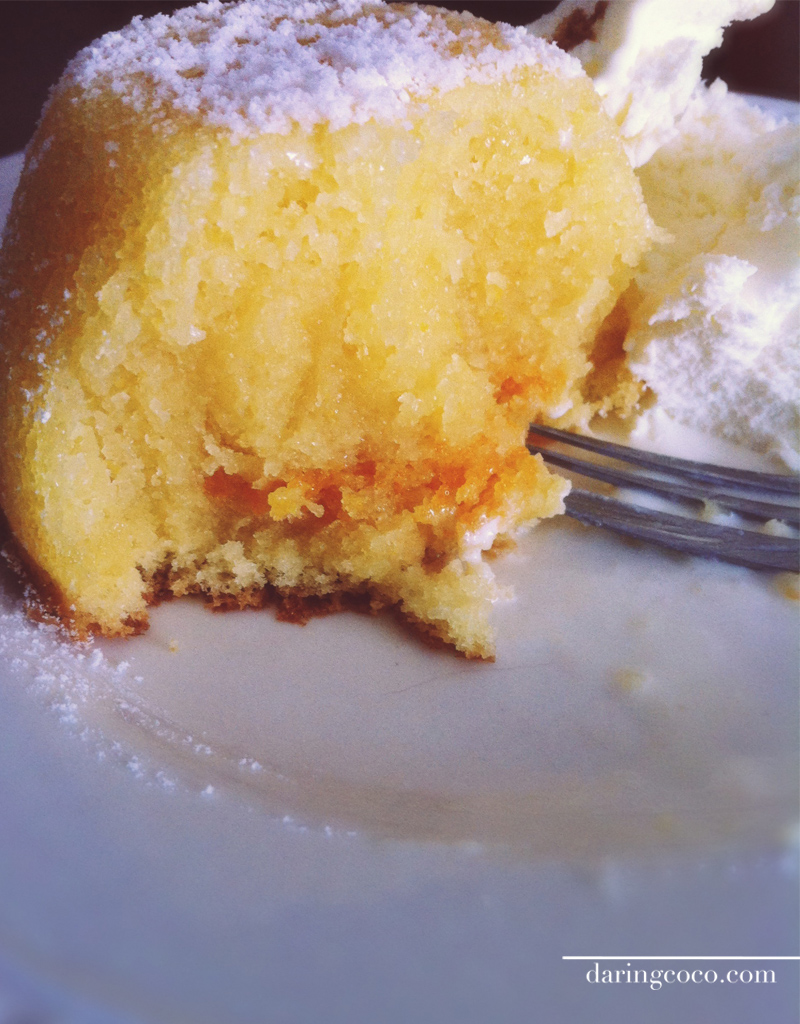 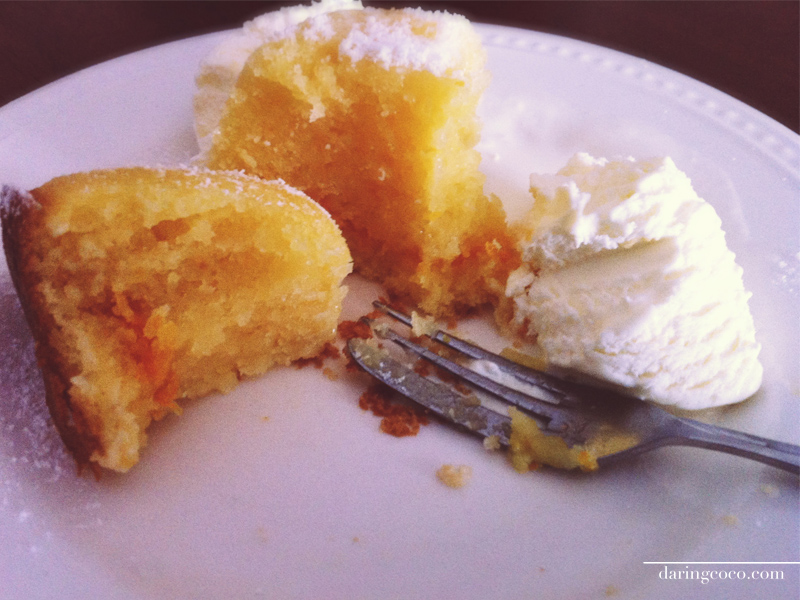