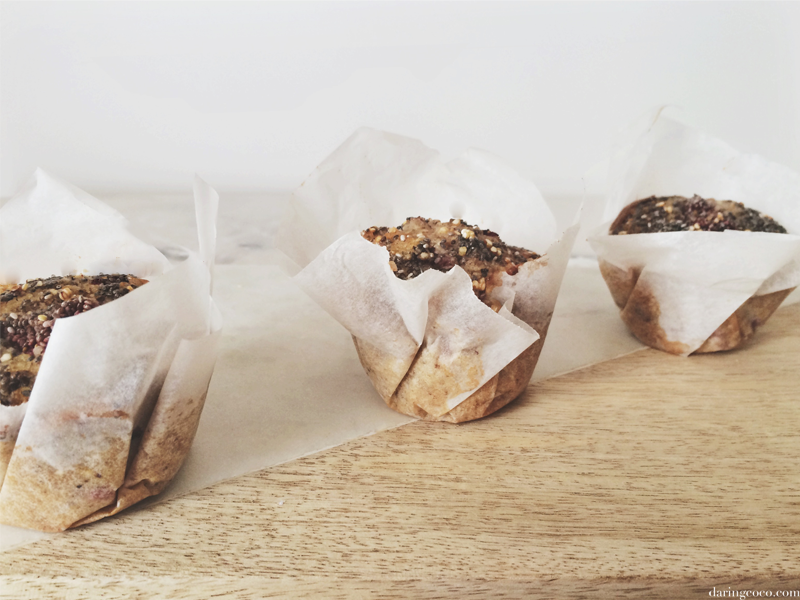 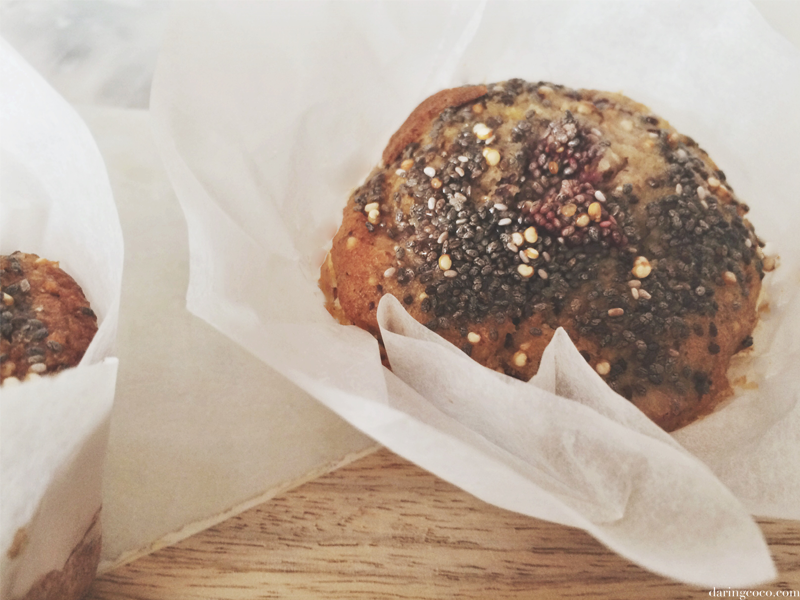 It may shock you to learn that I don’t eat breakfast.

I’m unsure if this is an Australian habit because I know a hell of a lot of people who don’t revel in early morning meals either. For me, it is simple. I’m just not hungry enough to consume so early in the day. And on the off chance when I do find myself feeling peckish, I favour something light and fresh like fruit or yoghurt as opposed to indulging in stereotypical breakfasts like bacon and eggs for example. Firstly I don’t like bacon (yes, you read that right) and secondly it’s way too heavy and indulgent first thing. Unfortunately for me my body has decided to become disloyal, and a betrayal which possibly spans over some time now. It turns out I have an under-active thyroid and thus am now on medication that requires me to eat something immediately after downing a minuscule white pill. 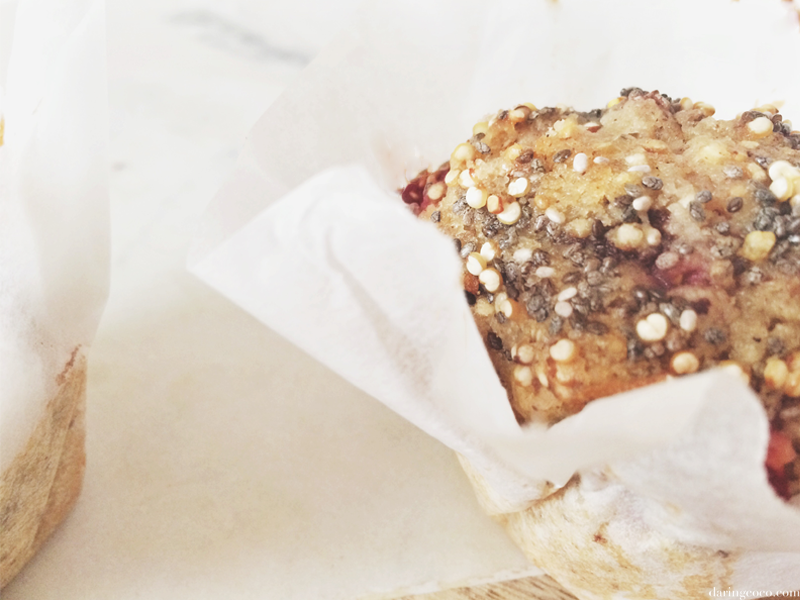 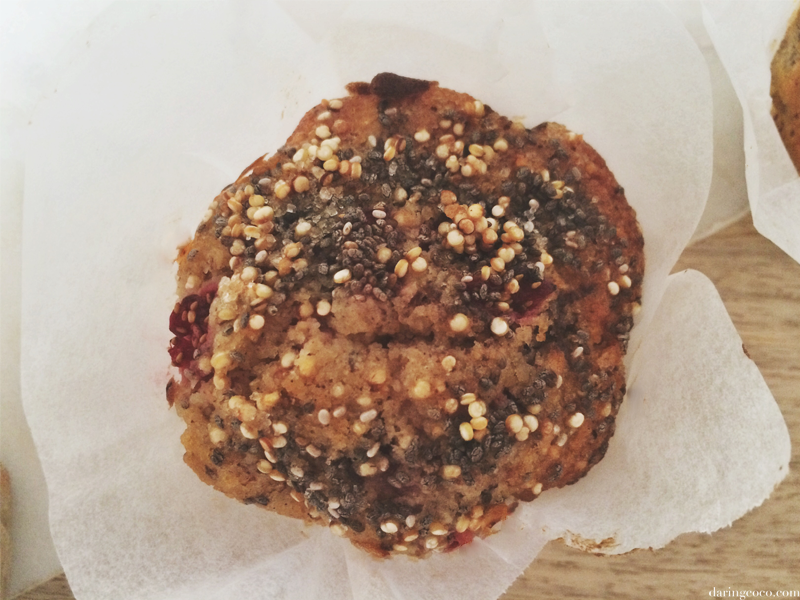 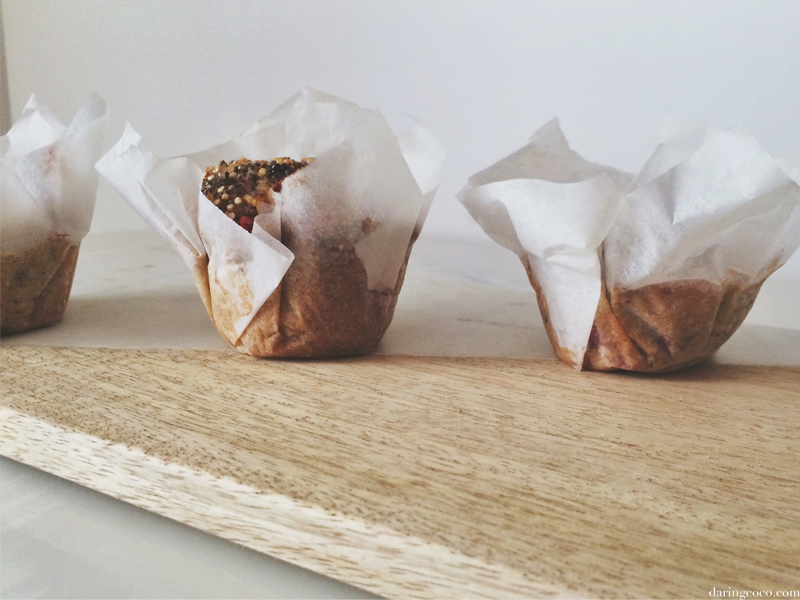 So what does one do to try to force themselves to eat so early each morning? You get creative; like with quinoa muffins. Also quinoa muffins that happen to incorporate fresh strawberries and molten dark chocolate. Because who could resist chocolate? Well truthfully I can because I have such an aversion to food in the mornings, but nonetheless these quinoa muffins have made the foray into breaking bad breakfast habits much less burdensome. These breakfast strawberry, chocolate and puffed quinoa muffins are undeniably light, moist and not overly sweet to insult first thing in the morning.

There’s also an enjoyable crunch on the tops of these quinoa muffins thanks to some crispy, puffed quinoa and chia seeds. They also happen to be relatively healthy but seemingly you can substitute or remove key ingredients like chocolate to make these quinoa muffins even better for you.

Preheat oven to 170°C/ 335°F.
Using an approx 18cm square sheet of baking paper, further cut into 4 pieces until you have a total of 12 small square pieces of baking paper.
Place and mould baking paper pieces into a large cupcake or muffin tray.
In two separate small bowls reserve about 1 1/2 tsp of puffed quinoa and raw sugar.
In a larger bowl place almond meal, flour, coconut, the rest of the puffed quinoa and sugar, salt and baking powder and combine.
Making a well in the centre then add vanilla, melted butter, almond milk and egg and mix until just combined. Add the chocolate and mix through and repeat with fresh strawberries.
Fill each hole on the baking tray so that it is just shy of full.
Top with a sprinkling of chia seeds, puffed quinoa and raw sugar.
Bake for around 25-30 minutes or until golden brown and cooked through.