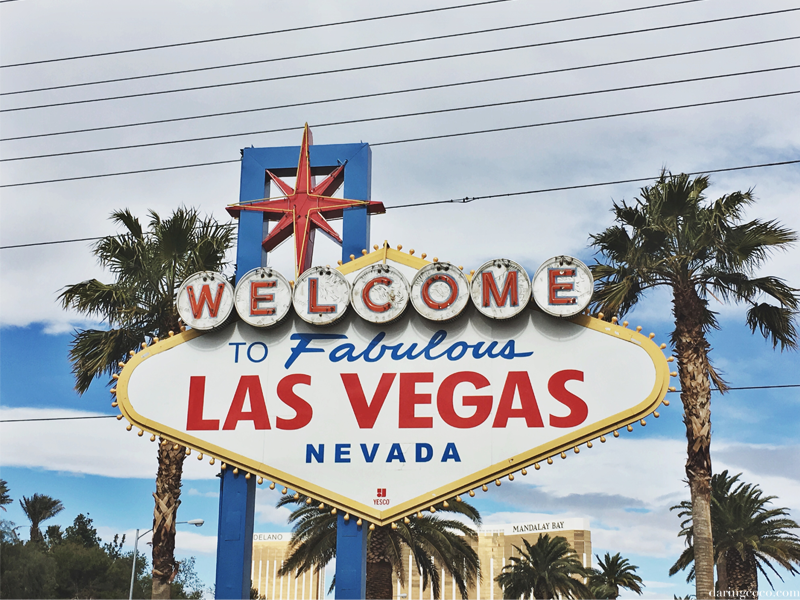 Las Vegas, Sin City or more appropriately the City that Never Sleeps. Neon lights infused with an array of characters from tourists to hustlers, superheroes to locals. It’s opulently vibrant, loud and bustling. Constantly moving and shaking, luxuriously ostentatious and a playground for all walks of life. A real hub of exuberance and indulgence and a place that rapidly sweeps you into it’s oversized lap and coos you with it’s beguilingly enchanting lullaby.

And I had the pleasure of celebrating my birthday weekend here in Las Vegas.

And what a pleasure it certainly was. 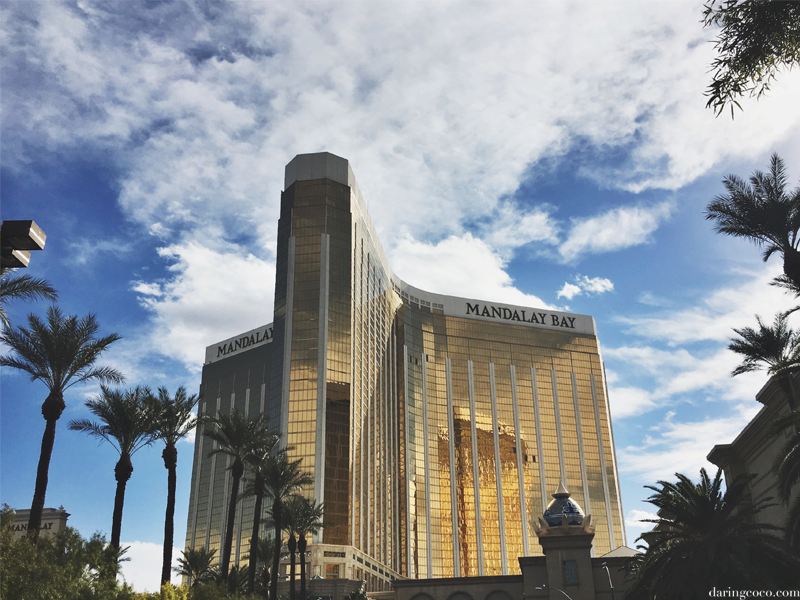 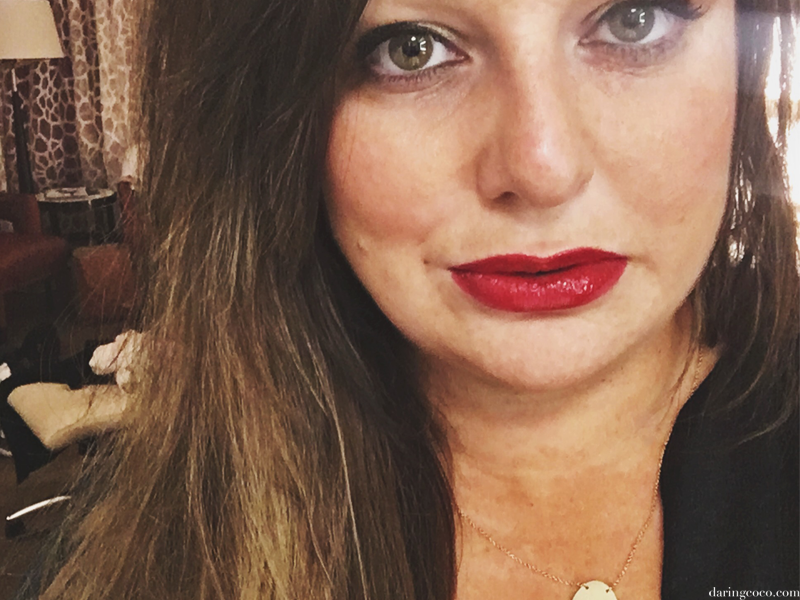 I can’t say I’ve ever experienced anything like this. The energy and buzz in the air; those bright neons illuminating the way. So many people gathered, traipsing along the walkways, lust filling their faces with doe like expressions. There’s a certain eagerness that lingers too; an expectation of sorts that good times will ensue. 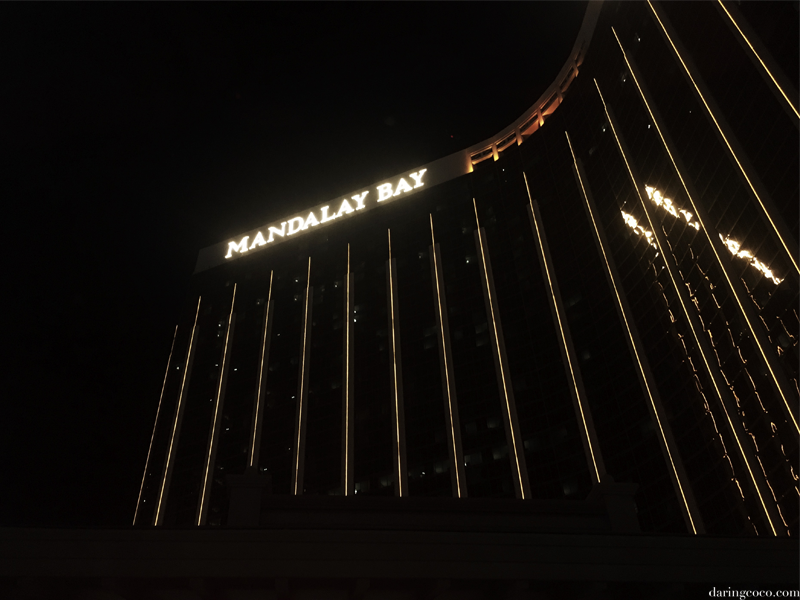 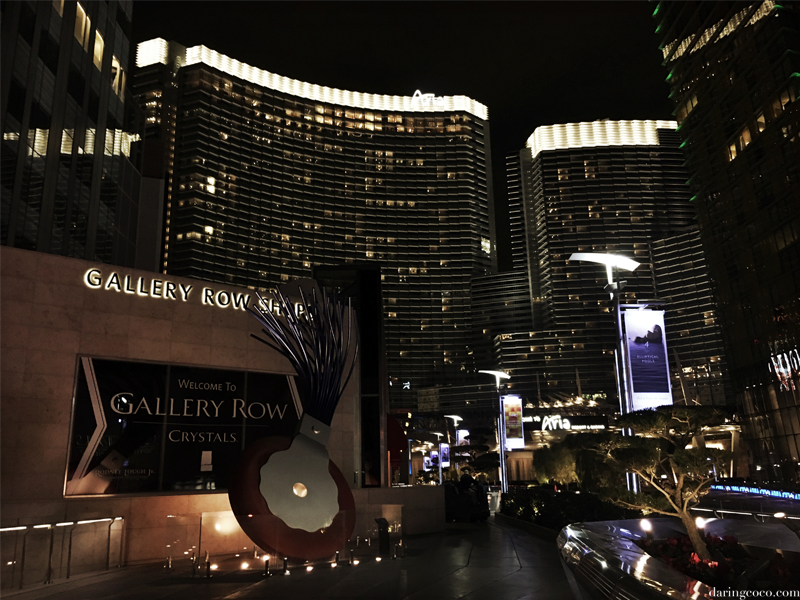 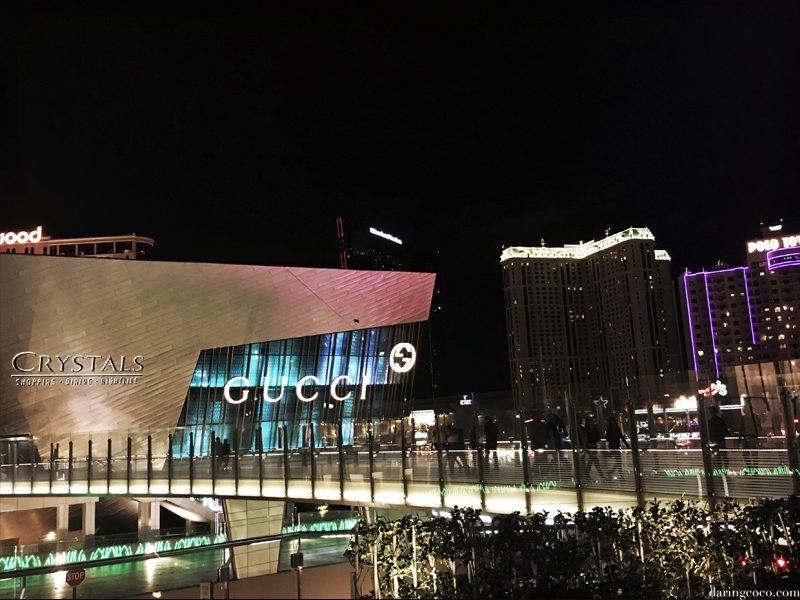 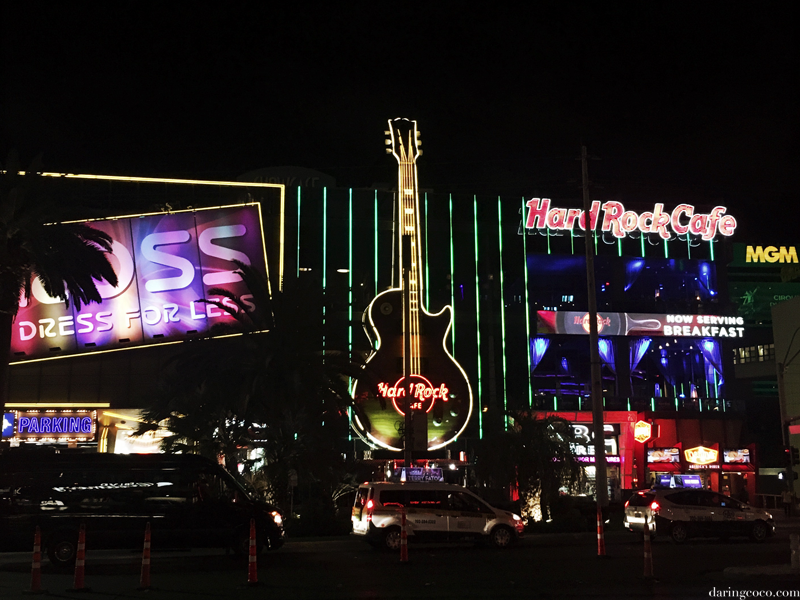 In the past, when people had spoken of Las Vegas it was always about the nightlife. Never once was a lively picture of the daylight hours painted. I’d constantly heard tales of wild nights and midnight forays; streets lined with revelling parties; all dressed to the nines. Las Vegas was always depicted as a gloriously flamboyant night owl, a place for nighttime festivities and never one for daytime carousal. And yet my experience could not have been farther from these truths because I found Las Vegas to be about as wild and glittery during the day as it was at night. The streets were perpetually lined with a mix people; no matter if sun or moon, rain or shine. All of which was experienced during my stay. From those in a mad rush to their next adventure, to others strolling at a leisurely pace, taking it all in. It didn’t matter what time of day it was.

We stayed at the Mandalay Bay which is perched at the beginning of the strip, right within walking distance (walking distance for this Aussie at least) from the infamous “welcome to fabulous Las Vegas” sign. Our hotel was wonderfully appointed and tastefully modernised with vibrantly artistic wallpapers and louvered doorways. And the bathroom, good God that bathroom was utterly heavenly.

However I can’t say I appreciated being perched beside an airport, but I did enjoy the panoramic views of the strip itself. 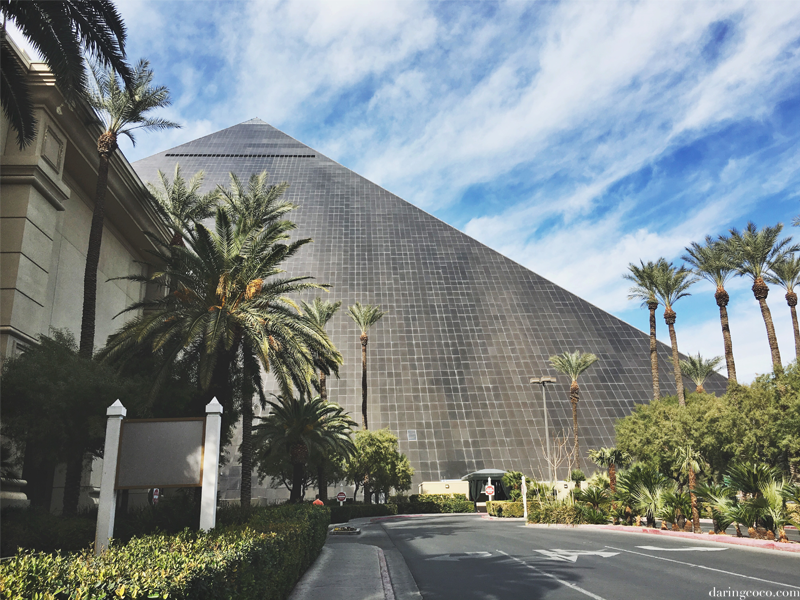 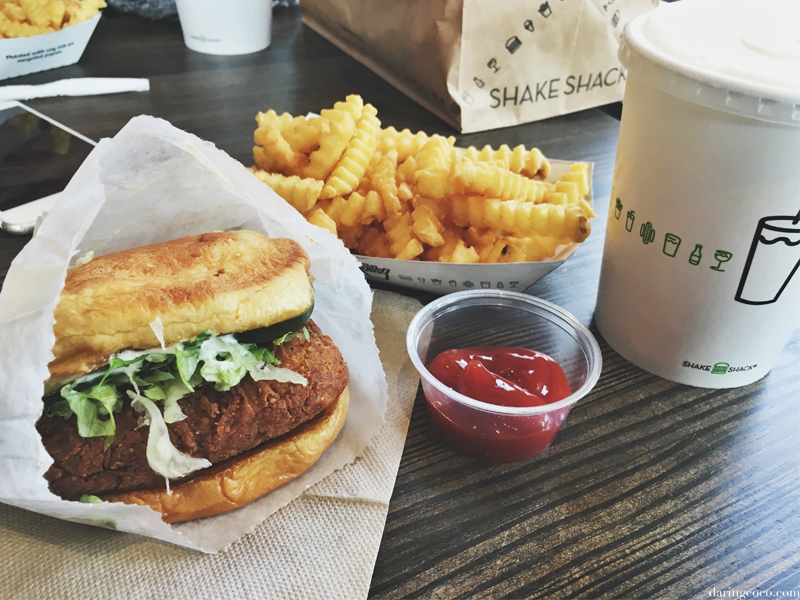 One of the more surprising highlights of this trip had to be stumbling upon a Shake Shack at the New York, New York outdoor shopping mall. It was a good 45+ minute wait in a labyrinth like line, followed by yet another 30 minute interim while your food was prepared. But boy was it worth it. And truthfully, I have to say I preferred Shake Shack over In-N-Out. In terms of flavour and menu choice, it definitely blew that Californian favorite right out of the water. And if you’re wondering what that hunk of deliciousness is featured above, it’s their chick’n shack burger. Crispy chicken, pickles and buttermilk herb mayonnaise. I’m drooling just thinking about it.

Another highlight of this visit was meeting the gorgeous Abby from House of Akih (who also happened to hook us up with our hotel. Could not thank her enough for that one). We lunched outdoors at Mon Ami Gabi, people watching as the French do, with the threat of rain lingering in the air and the dancing fountains of the Bellagio entertaining in the background.

This little bistro seems to be the talk of the town and I can see why. It takes you back to the streets of Paris, fine details like wrought iron and mock limestone accents really transport you to Europe. The fresh baguette accompanied in it’s own paper bag is quite novel too. It was my first taste of crusty, fresh bread and I savoured every mouthful. My frisee, kale and bacon salad was very palatable, though as in France, I should have realised that when I requested my poached egg to be well-done, my request would have fallen on deaf ears. I’d also suggest reservations as when we feasted it was packed with other hungry diners. Service was also somewhat rushed, you could feel the eyes of the waiters eying for their moment to clear your table and send you on your merry way for another party to dine.

Can I just say how amazing it is to meet fellow bloggers?

Meeting a person whose journey you follow through pictures and words is always so fascinating. It’s like you’ve known them for the longest of times, and in a way, you do. It’s also the greatest feeling conversing with someone, face to face, who actually understands the blogging world and just how much time and effort goes into each post and photo. A lot of outsiders seem to think what we do is easy and write it off as frivolous narcism, and for the most parts, that could not be farther from the truth.

Our stay in Las Vegas was short and sweet; a mere three nights to be exact. I didn’t get to explore as much as I thought I would and yet I managed to see quite a bit. 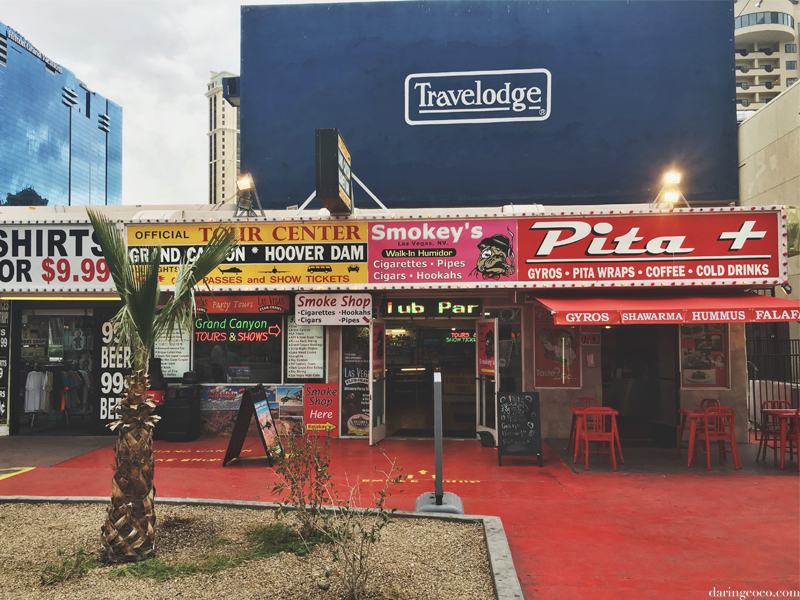 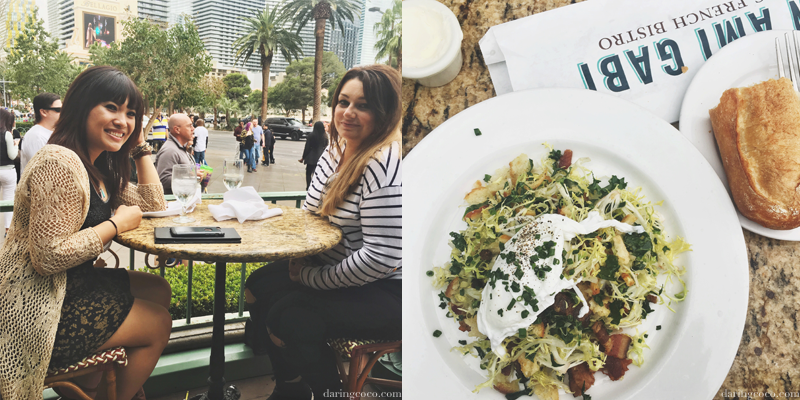 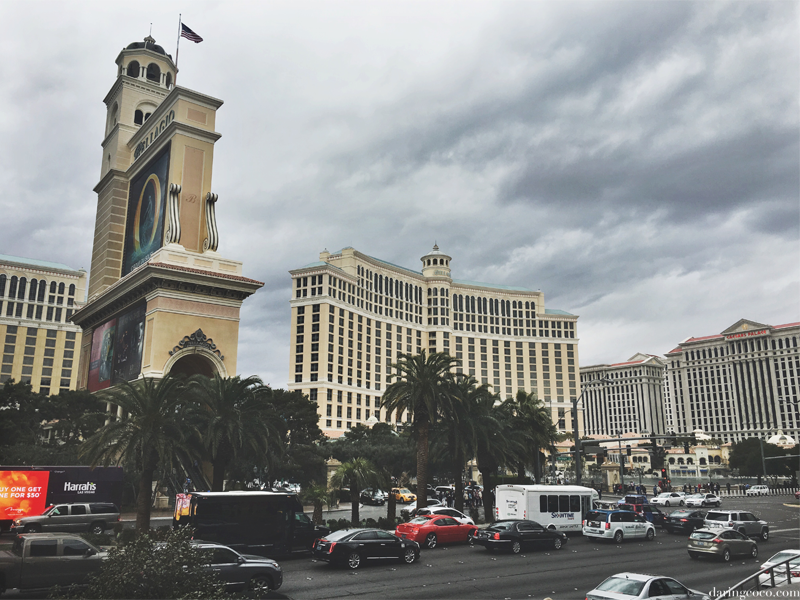 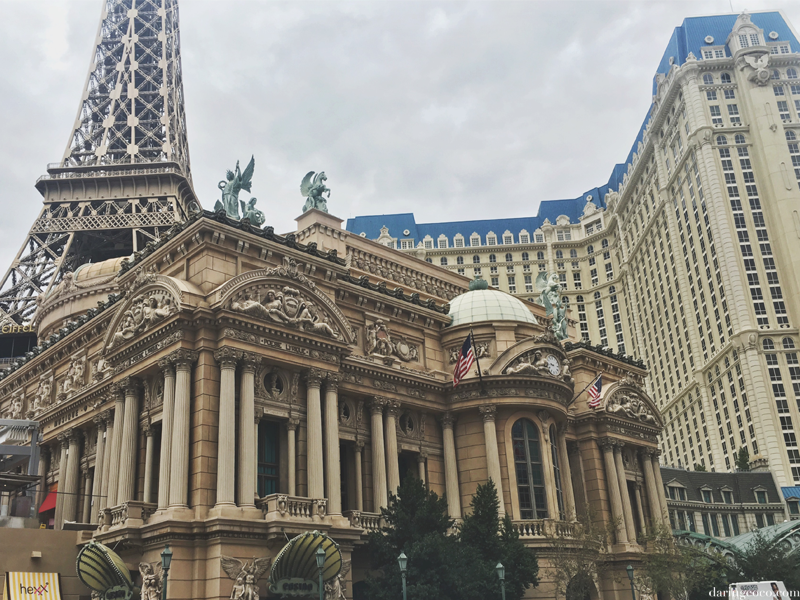 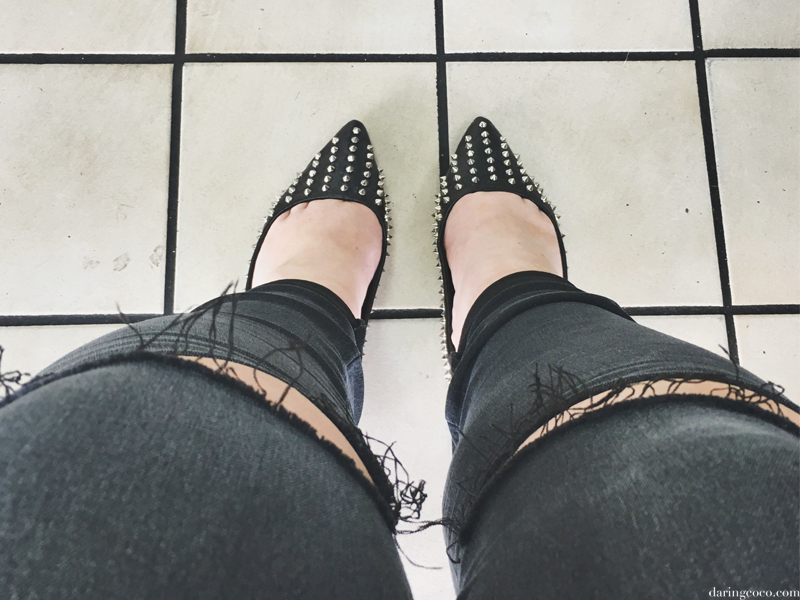 I thoroughly enjoyed venturing out onto the sidewalk, even if I had to wrangle past promoters and navigate around other annoying tourists. If it’s your first time in town I’d definitely recommend just hitting the pavement on the strip and taking your time to see it in all its glory. That said, depending on time of day you probably won’t get to see the entire strip from start to finish. It could take a few hours to do so, but even seeing just a small portion is very much rewarding.

When it comes to shopping this city is a mecca for it, especially when it comes to luxury labels. I really only got to peruse through the mall at Caesars Palace and I couldn’t recommend it enough. The multilevel H&M store is fairly hyped up and in terms of selection this store for me had much more to browse from (compared to other stores I’d visited in California). In fact Caesars Palace is a place you’d want to wander through period. It is vast and full of lively characters. There’s also a number of highly recommended restaurants to select from like Nobu, Mr Chow and Gordon Ramseys Pub.

The Aria also seems to have quite a buzz about it. Being a recent addition to Las Vegas it’s about as sparkly and shiny as you’d expect from a new development. On my next outing to Las Vegas I promised myself that I’d call this hotel home. It really is tastefully modern and luxe and seems to attract a more sophisticated crowd. It also houses the Crystals shopping mall which again just oozes in glittery refinement, brands like Gucci and Tom Ford beckoning you towards them. 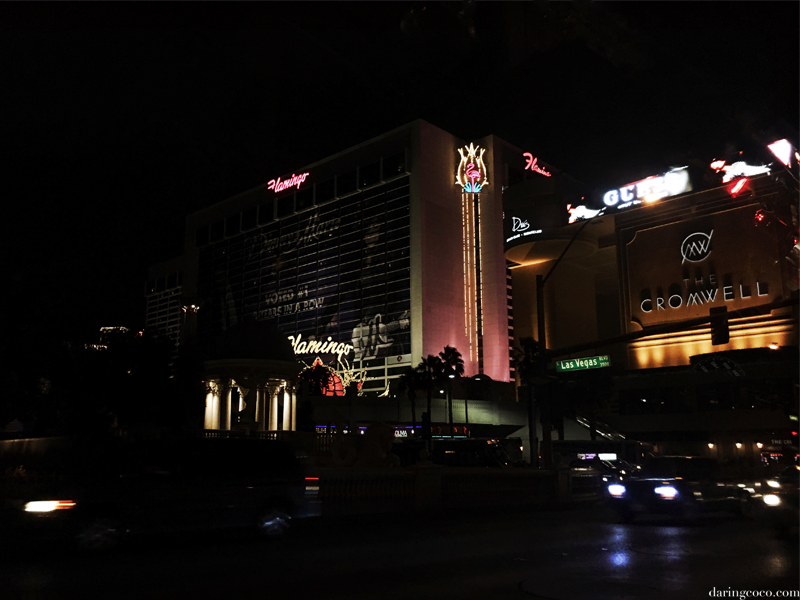 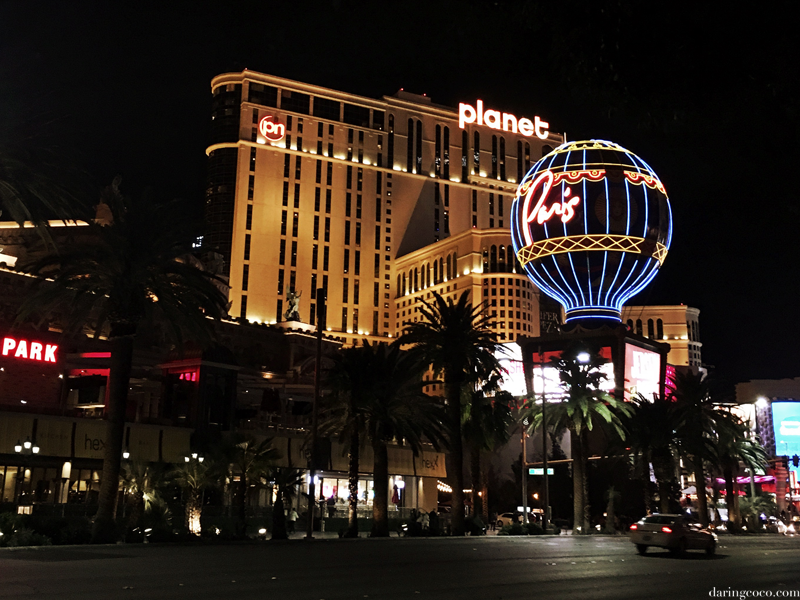 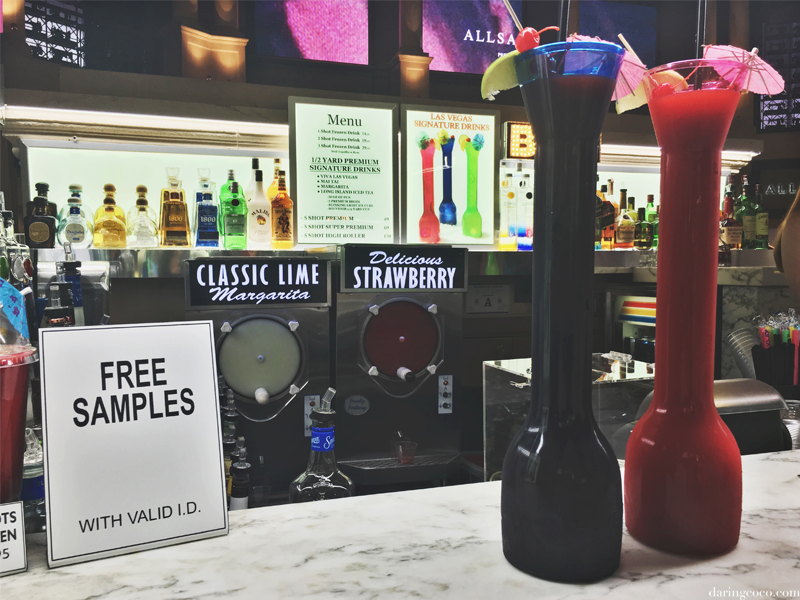 I have a number of recommendations for Las Vegas, but personally there are certain “things” I believe one must do/try while out here. The first is sipping on an alcoholic/frozen beverage in an oversized, tall novelty holder (see image above). For the life of me I can not remember what they’re called but you’ll see nearly every second person downing one or carrying it around. Abby recommended buying one from the Planet Hollywood as they were the cheapest on the strip, but as time was not on our side we ended up getting one at Ceasars Palace. All up it will set you back around $50USD. It seems like a lot of money, but hey, when in Rome right!

If you’re a bit of an adrenaline junkie I’d have to say a ride on the rollercoaster at New York, New York is a must too. There are some insane drops, upside down moments and an impressive view of Las Vegas too. My only qualms on this experience was the need to purchase a locker to hold your stuff while you rode it. You’re not allowed to carry any belongings like a handbag for example, so unless you have a friend who is willing to wait and hold your belongings be prepared to spend a few quarters on hiring a locker. There are numerous located in the venue itself, but still nonetheless annoying. 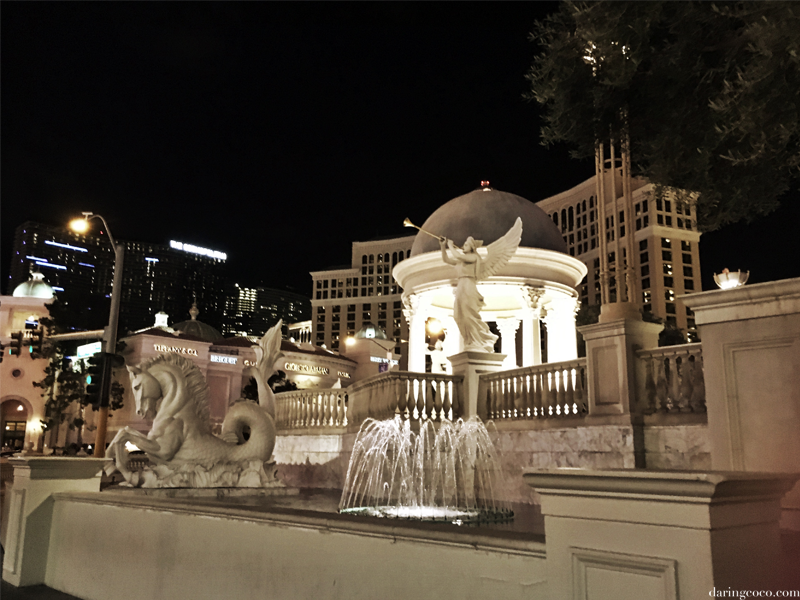 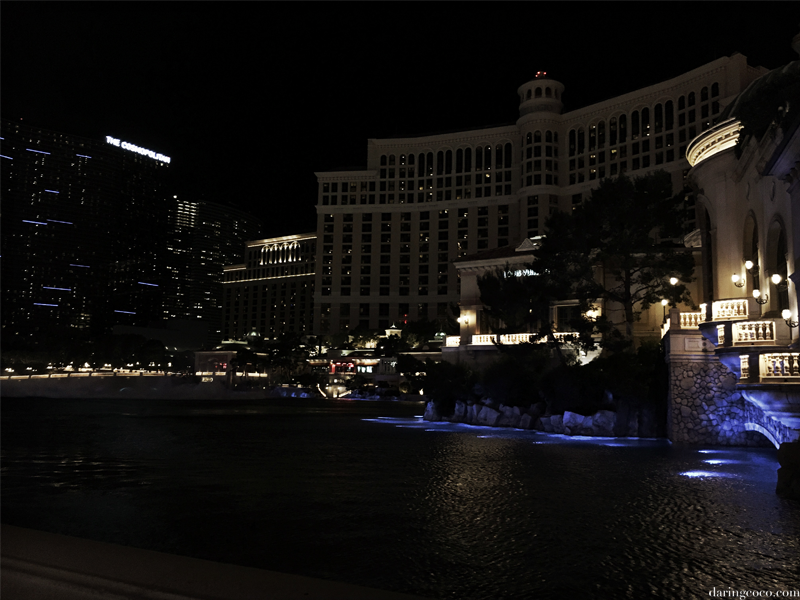 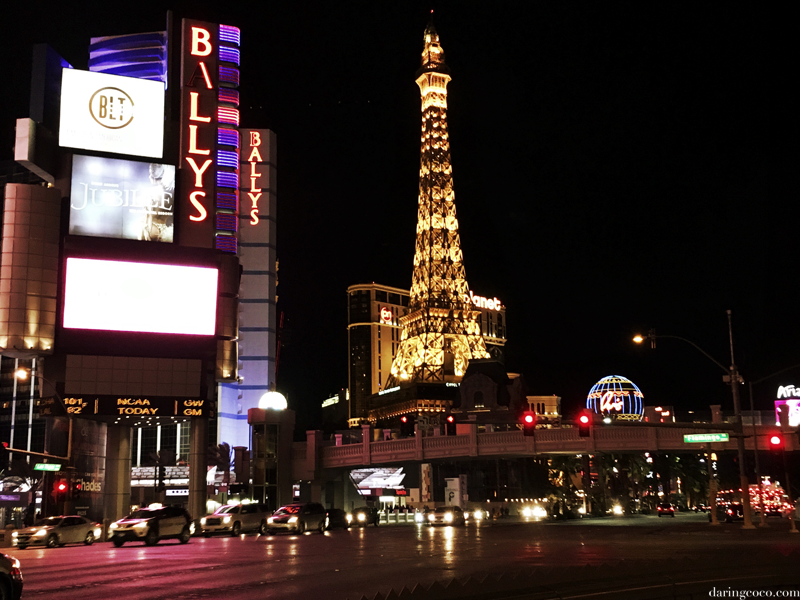 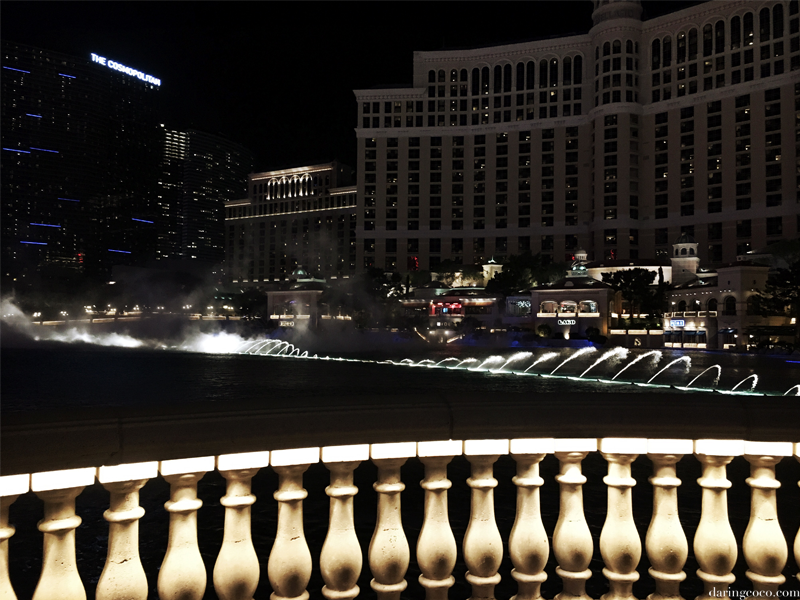 Also the Bellagio fountains are a must see. These are synonymous with Las Vegas itself and they run every hour during the day and every half hour at night. So there is no damn excuse to miss out. I was fortunate enough to see both day and night. Another thing to do is to a see a show. If there’s anything else more associated with Las Vegas then it is definitely the live shows. From comedy to music, theatrics to body contortion, there is something for whatever your mood is. We settled on Zumanity after having numerous people recommend it to us. And it did not disappoint. The show is an over eighteen cabaret style by Cirque Du Soleil. There is a lot of “wow” moments and a fair bit of nudity. There’s even some comedy thrown into the mix. 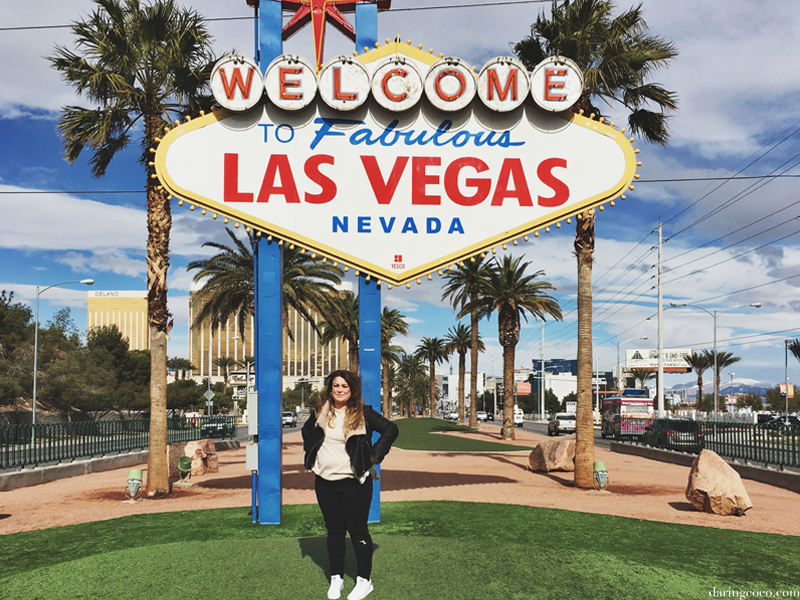 Excuse that awful final photo. Unbelievably that was the “best” shot I had of myself. Curse the glaring sun and my notorious resting bitch face.

In terms of eating, the stand out was Beijing Noodle No.9 at Caesars Palace. It’s classed as more of a casual venue but the interiors are anything but. You’re greeted by giant tanks filled with goldfish upon entry and an inside adorned in a white filigree screen, something completely unexpected. Their food is impressive, some of the best Chinese we’d eaten the entire length of our trip. And the cocktails potent.

Another site to see would be Fremont Street. Any well versed lover of this city will tell you to take a stroll down here. It’s the founding street of Las Vegas, dating back to the early 1900’s. It is super iconic and a neon sign lovers wet dream. And the gambling is supposed to be exceptional too. Speaking of, one thing I have to say I regretted not doing was a little bit of gambling myself. Not that I am actually into it, I am the greatest sore-loser you’ll ever meet, but something about being here entices you to part pays with a quarter and try your luck at winning that super pretentious red sports car. We actually made a pact to try it out before we left but alas, it somehow slipped our mind. If you get a moment and chances are you’ll walk past numerous of these why not try your luck.