And yet another beauty I ever so fortunately managed to cross off my bucketlist.

The Grand Canyon certainly lives up to its name and hype. It is incredibly vast and striking, holding such intense grandeur and a truly unique splendour; one that can not be denied. And when standing out on various precipices looking inwards towards the gaping void carved by the Colorado River some five million years ago, one can not help but feel especially small and insignificant. A sight which left me breathless and contemplating if such awareness was akin to those astronauts encounter when in space, looking down upon Planet Earth. After a weekend traipsing through the bright lights of Las Vegas and a short but sweet stint at the Hoover Dam, the next point on our itinerary was to drive out to The Grand Canyon. While venturing out towards these parts of the USA, we opted to base ourselves in Flagastaff, Arizona. Finding it was the ideal balance between two major points of interest for our trip; The Grand Canyon and Monument Valley.

Traveling in late January, at the heart of the frosty, wintry season, the original plan called for us to depart Las Vegas and proceed directly to The Grand Canyon for the day. However the night prior to our departure from Las Vegas we found we needed to drastically alter said plans. The weather forecast warned of an approaching snow storm and upon checking the National Park Service they too had placed caution and advised visitors not to enter the park. Being responsible for driving during this trip, I had extreme anxiety traveling on roads dusted with ice. Mainly because I had never seen snow before, let alone driven through it. Most thankfully the drive itself wasn’t too strenuous. Of course in hindsight, it never is. This particular part of our journey will remain forever embedded in my memory because the overall experience ended up being very much delightful. The magic began at the cusp of dusk, as the sky darkened slightly, illuminating sudden puddles of white. They were strewn haphazardly on the highway and ever so mysteriously blanketing fields, but exclusive to one side of the road. For two Australians who’d never seen snow prior to that very moment, the unfolding scenes left us slightly perplexed and presuming. The two of us afraid to speak up, apprehensive of our assumptions and conclusions as to what these patches of white truly were.

Finally my travel companion dared to sound exactly what I had been pondering upon. And once the ideal moment arose, we pulled over to investigate further. As we approached the petite prairie, to our delight the white blanket was indeed snow and as such our shenanigans commenced. At first it began with cautionary caressing; unsure if the frozen glaze would sting or prickle. Extreme uncertainty shifting promptly to imprudence, as we attempted to entertain several forms of “stereotypical” snow activity that we’d seen many a time on TV and films. From poor attempts at formations of snow balls to even weaker endeavours creating snow angels. Our antics scoring us a chorus of “toots” from fellow vehicles passing by. And more annoyingly damp clothing and socks.

As we continued forward with our drive to The Grand Canyon, that deceptive blanket of white began to dramatically increase in density. Creeping in from the fields and out onto the tarmac. At first it softly scattered the emergency lane, then inched closer and closer, gradually shifting to encroaching mountainous mounds. The kind that threatened to spill out on the highway. And with the imminent threat of nightfall impending, that delightfully gossamer smattering of white turned from friend to foe, as it began coalescing along the pavement beneath the tires. The road was no longer tinted in iconic black, but now patched in an omniscient grey.

Unbelievably, it remained a novelty for some time. Those alabaster streaks contrasting against the road like an impressionist painting; albeit in monochrome. The sides of the highway remained heavy with the burden of snowfall, but the protection and security of snowplows were evident. Even as it increased in substance as we drew closer to Flagstaff. That was until faintly drawn swarms began to dance within the headlight beams. A scene reminiscent of the kind you’d experience whilst driving through the countryside on a balmy summer day. Only these were not mosquitos nor flies, they were actual flurries of snow. And what should have been a second wave of enchantment, turned intimidating as our awareness and ignorance over what exactly black ice entailed loomed unnervingly. This sighting of falling snow was to be our first and only sighting, as we drove along the outskirts of a waning snow storm. It was the very one which originally hindered our travels to The Grand Canyon with its presence. Those feathery flurries remained with us on our drive, until we finally arrived at our hotel in Flagstaff, Arizona. And it was here as we stepped out of the car that we finally got to revel and fully appreciate them.

The feeling of snow against exposed skin was a most endearing sensation. And it is a feeling that will haunt me until my dying breath. It is cold and bitting. But also very much passionate; like a bizarre combination of welcome, velveteen pins and needles. Seemingly by morning the obvious joys of snow drastically subsided as reality reared its ugly head. As as the temperature plummeted to an arctic -23°C overnight, our Jeep was coated in a thin, but manageable spread of snow. Other vehicles in the parking lot were not as fortunate, most weighed down by a mass of white. Some took to shovels to break at the solid clumps hindering them from entering the car, others using makeshift tools, like hiking boots to chip away at the roof. That said, we still had issues with the frost. Mainly with items we’d left in the car overnight. Like our substantial hoard of bottled water which had frozen solid. And I managed to leave my Nikon camera in the glove compartment, and it too refused to cooperate for many hours.

At the time, the snow storm felt like a problematic inconvenience. But in hindsight it was a real blessing. By rearranging our itinerary we not only managed to see and add one more point of interest, but also got to experience snow for the first time. It also meant the drive to The Grand Canyon was to be even more pleasurable, as remnants of the day prior remained present in the landscape. The drive from Flagstaff, Arizona to The Grand Canyon takes around an hour and half. But it was slightly longer for us as my outdated GPS device managed to detour us off course numerous times. I don’t recall catching glimpses of The Grand Canyon while we drove towards it. In fact it felt overly concealed and obscured by vegetation and snow. Aside from the standard road signs, one would have no idea what actually lay ahead, were they not expecting such a natural grandeur that is.

As with our drive to The Grand Canyon, the drive within the park itself felt slightly complicated; despite being provided with a park map. However I blame the dazzling display of snow encrusted tress for distracting me. We elected to base ourselves at The Grand Canyon Village, were a complimentary shuttle bus was available to escort us to each of the three available lookouts at the South Rim. While you’re more than welcome to peruse the grounds on your own accord, we thought it best to catch the bus considering how perplexed we become solely upon entering the park itself. That said I would highly recommend using theses buses, as it’s highly convenient and you’re much more at leisure to explore on foot. And depending on the crowds, there is no need to fret over parking at each lookout either.

What I found intriguing during the commute on the bus was how The Grand Canyon continued to remain concealed. The air is thick with anticipation and with an abundance of promise for what lays ahead. Everyone is seated expectantly, impatiently awaiting for the moment when the trees will part ways and reveal what we’ve all been so desperate to regard.

And when that moment finally arrives, boy is it magnificent. 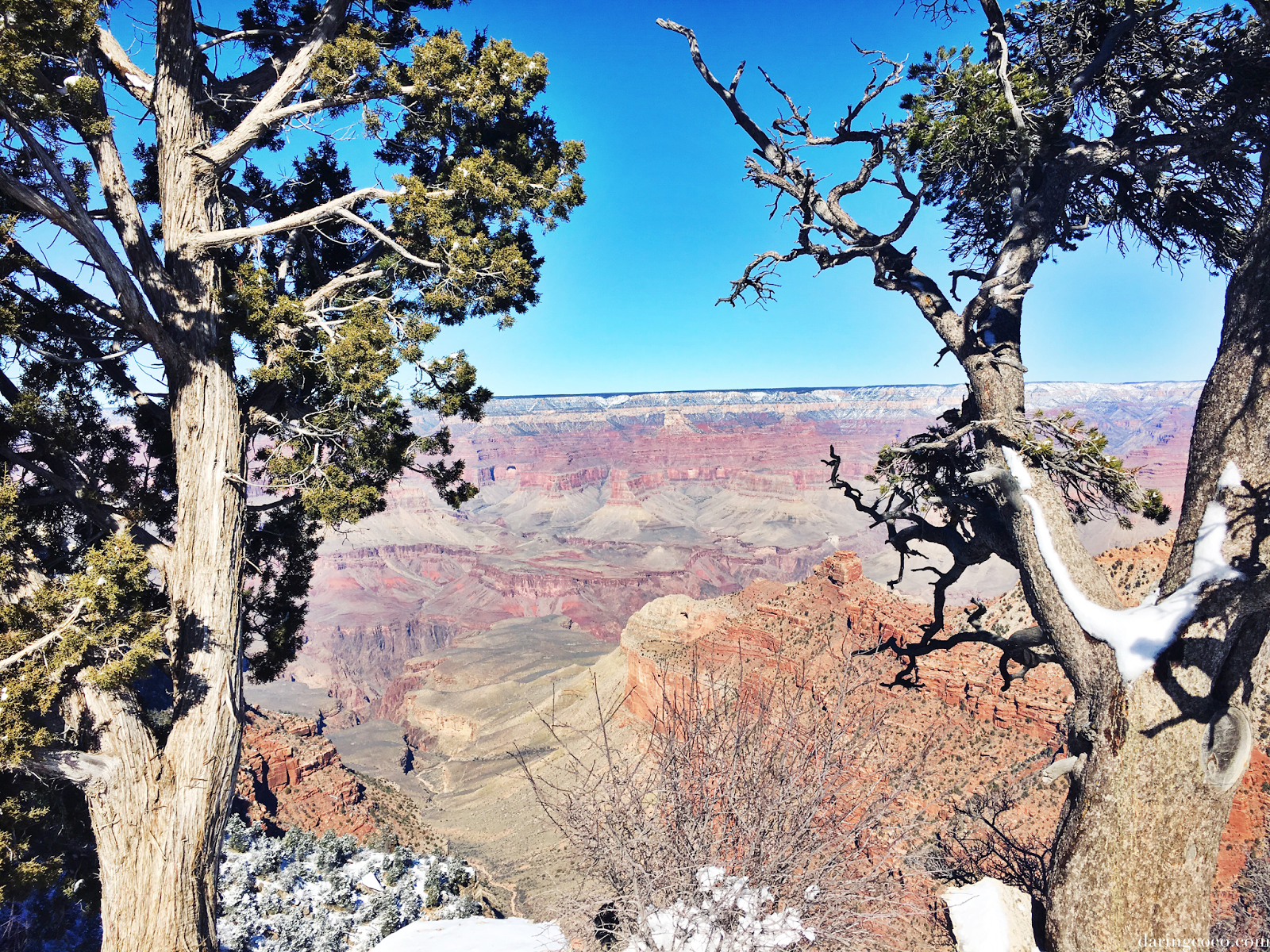 At our first stop we met two hikers who had bravely camped in the canyon overnight. Considering the snow storm and warnings, we were bewildered at first, then curious on how they managed to walk away sans frostbite. However they were quick to point out how the temperature at the bottom of The Grand Canyon was significantly warmer than what was above it. I suppose the towering walls of rock help to create a specific microclimate and shield it from the elements above. These two men painted such a resplendent image of their camping escapades. One of campfires by a sedative creek and a night sky teeming with effervescence. I think one day I’ll return and do the very same thing. However in January? I’m not entirely sure.

This first stop contained numerous trails which led downwards into the canyon itself. Unfortunately we decided not venture down. Being the klutz that I am, the probability of me slipping off the sides of one of these trails was very high. Plus my trusty Adidas Originals proved to have little traction against the snow. So it will come as no surprise that I did in fact manage to face-plant in the snow. It was at the third and final stop where I saw a ravishing scene of overhanging tree limbs overlooking the canyon. A scene that I felt compelled to capture myself within. I envisioned the setting perfectly. Me hanging off that tree comically yet in the most graceful of fashions whilst looking out onto a sea of jagged rocks. As I attempted to manoeuvre over the barrier I misjudged the actual depth of a rock swallowed in snow and seemingly lost my footing. Gravity abruptly pushed me downwards into the snow, and all in front of a watchful audience. Unfortunately for me there is shameful photographic evidence of such happenings, around fifteen photos to be exact. For the sake of my pride and humility I decided against showcasing them on the blog. However I may just share one of them over on Instagram this week so make sure you’re following me on @soniademacedo if you’re ready for a laugh.

Each of the three sites hold truly mesmerising and unique views of The Grand Canyon, so electing which site I preferred more is an impossible feat. The Grand Canyon is that. Grand and stretching for as far as the eye can see. I felt as though I could have spent weeks navigating and investigating each site individually. Inhaling its splendour and marvel with my entire being. And while the snow proved to be problematic at times, it also created a blissful wonderland. Bleaching the grounds with a resplendent alabaster, one you’d rarely encounter nor envision when it comes to places like this. And while I expect The Grand Canyon to be equally as charming during the warmer months, with contrasting rusts even more hypnotic, I quite enjoyed seeing The Grand Canyon during the winter season. Because there is a certain charm and allure when it’s frosted in white like this.