Disneyland is purely iconic and undeniably recognisable worldwide. It holds a certain nostalgia and pulls at ones heart strings. But for Australians (speaking objectively here), it is so much more. You see we don’t have a theme park of this calibre in our backyard. And while the majority of the world faces a similar conundrum as what we do, their actual travel time to such places is pittance compared to the ten plus hours Australians face.

The closest resort for us is in Hong Kong, one that I was fortunate to venture to back in early 2006; right when it first opened to the public. And while some parts of the resort were still under construction, it still didn’t fail to mesmerise. From the specifically elaborate Disney touches inside the train (like the undeniably cute mouse ear straphangers) to the period details of Main Street USA. So having previously experienced the magic of Disneyland nearly a decade ago my anticipation levels for Disneyland California were tremendous. Especially considering this was the only theme park directly designed by Walt himself.

That in itself is a promise of pure, unadulterated wonder.

Of course, our day didn’t begin on a high note. That blasted GPS of mine took us on an unwelcome tour of Anaheim. It took us a good two hours of circling the outer rim of the resort and within a maze of confusing roads to find the relevant ramp towards the actual parking lot. Seemingly for those who don’t face such trivial navigation challenges you’d know that there is a specific turn-off on the highway for Disneyland which leads you straight into the parking lot if you continue forward. You’d also expect that after such a kerfuffle on the previous day that we’d be the wiser to this on our second day. You’d be dead wrong. You see while we did manage to make the correct turn off the highway, unbelievably I managed to make an incorrect turn which saw us yet again circling the outside of the resort for a good half an hour.

Indubitably all that frustration and annoyance melted away as we were effortlessly escorted and directed through the parking lot. Like a well-oiled machine, Disneyland’s operation is second to none. It is akin to a perfectly choreographed dance of organisation; one unlike anything I’d ever experienced before. Even as we crossed that threshold into the park from the shuttle bus. Even the security checks, everything is meticulous to detail and timing.

Disneyland California comprises of two theme parks. The iconic Disneyland and California Adventure. Both parks take a good day to explore, perhaps even longer, especially if travelling with children. Even without young companions we found ourselves increasingly pressed for time. Disneyland was also in the midst of its 60th Anniversary Diamond Celebration, so the park was decked out accordingly.

For day one we chose to explore Disneyland. 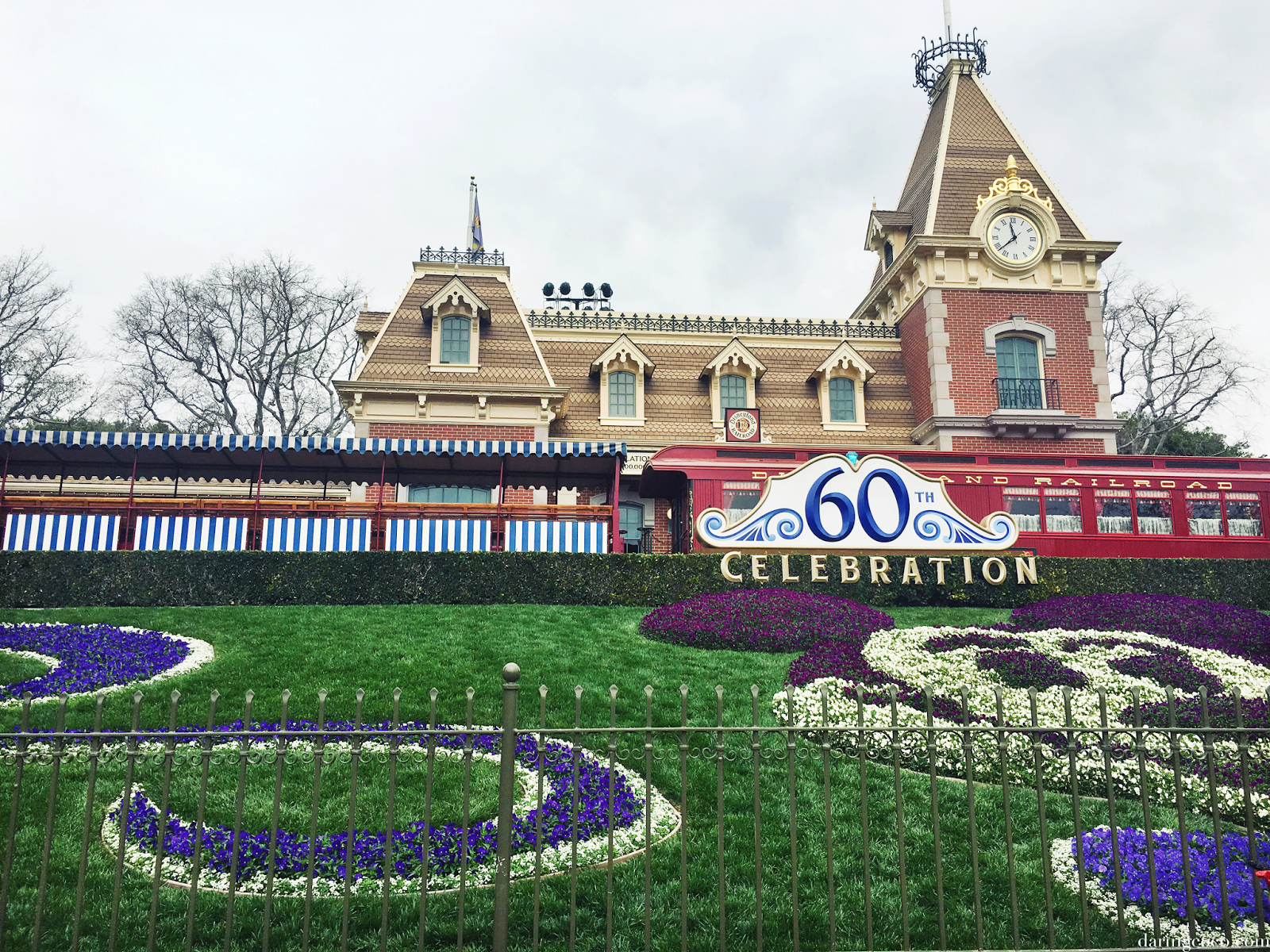 Seemingly more orientated to young children or those young at heart. There are numerous attractions for older “kids” to experience also, like the Matterhorn Bobsled or Indiana Jones Adventure. While the rides were enticing, one thing that never ceased to amaze is the extraordinary detail and execution of the parks design and architecture. Like Sleeping Beauty’s castle, originally inspired by Germany’s Neuschwanstein Castle, is as romantic and beautifully imposing as the original. And Main Street, USA would have you thinking you’ve stepped back in time. In fact the entire resort feels like an independent micronation consisting of various contrasting counties. Especially when you factor in the hoards and I mean hoards of people traipsing about.

This fascination is not solely limited to outer facades. And in truth, I envy the imagination of these park designers who’ve successfully and continuously create such a phenomenal magical environment. Like rides and entertainment teeming with hidden messages and interpretations, most of which can be easily overlooked considering the sheer grandness of such a place which captivates and occupies ones mind. No small detail is overlooked, from rides with towering rooms brimming with artifacts and objets d’art to landscaping. Even small seating nooks scattered throughout the grounds have not been overlooked. Every minuscule detail has been pondered; regardless of significance or conspicuousness.

Of course most people come here purely for the rides and the meet and greets with iconic characters, like Minnie and Micky Mouse. Or Pluto who I managed to score a photo with. As are those infamous mouse ears. It almost feels like a rite of passage to acquire and don such pieces. While the majority of park goers may not be decked out in Disney memorabilia, those ears however are prevalent on young and old. Those ears will set you back around USD$18. Much like most things at Disneyland it doesn’t come cheap. There are copious designs to peruse and select. From sequins or lace to designs inspired by beloved Disney characters like Maleficent. The Mad Tea Party is a vibrant ride and probably one synonymous and quintessential to Disneyland. I don’t think there’s a single soul who hasn’t taken a selfie while circling about on this ride. And while this is more centred towards children, Dumbo the flying elephant was very much nostalgic as it was one of my favorites back at Hong Kong Disneyland. I actually have numerous “selfies” on that ride (“selfies” before they were coined “selfies” that is).

Tarzan’s Treehouse was also wonderfully whimsical. In fact the most memorable recollection I have with Hong Kong was at Adventureland were copious fits of giggles ensued with mishaps with water-shooting totem poles and my dear friend. There was also that ten year old who poked fun at her for continuously being spooked by random robotic animals on the Jungle Cruise and her revenge when an emerging hippopotamus made him shit himself (not literally) while also spurting water and drenching him.

While that very cruise sadly ceases to operate these days, the treehouse was just as I remembered it and it made me nostalgic for being nineteen and carefree again. 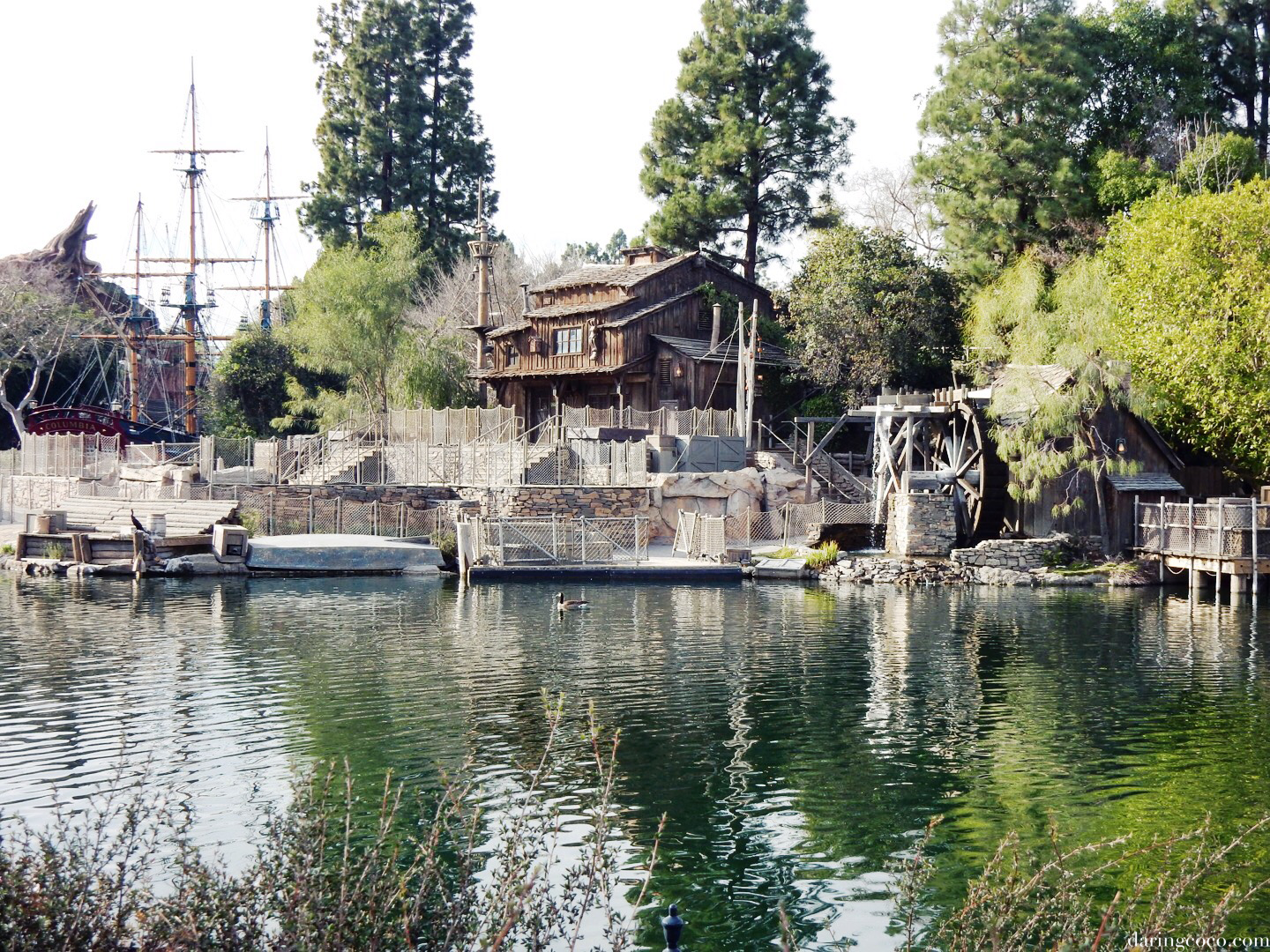 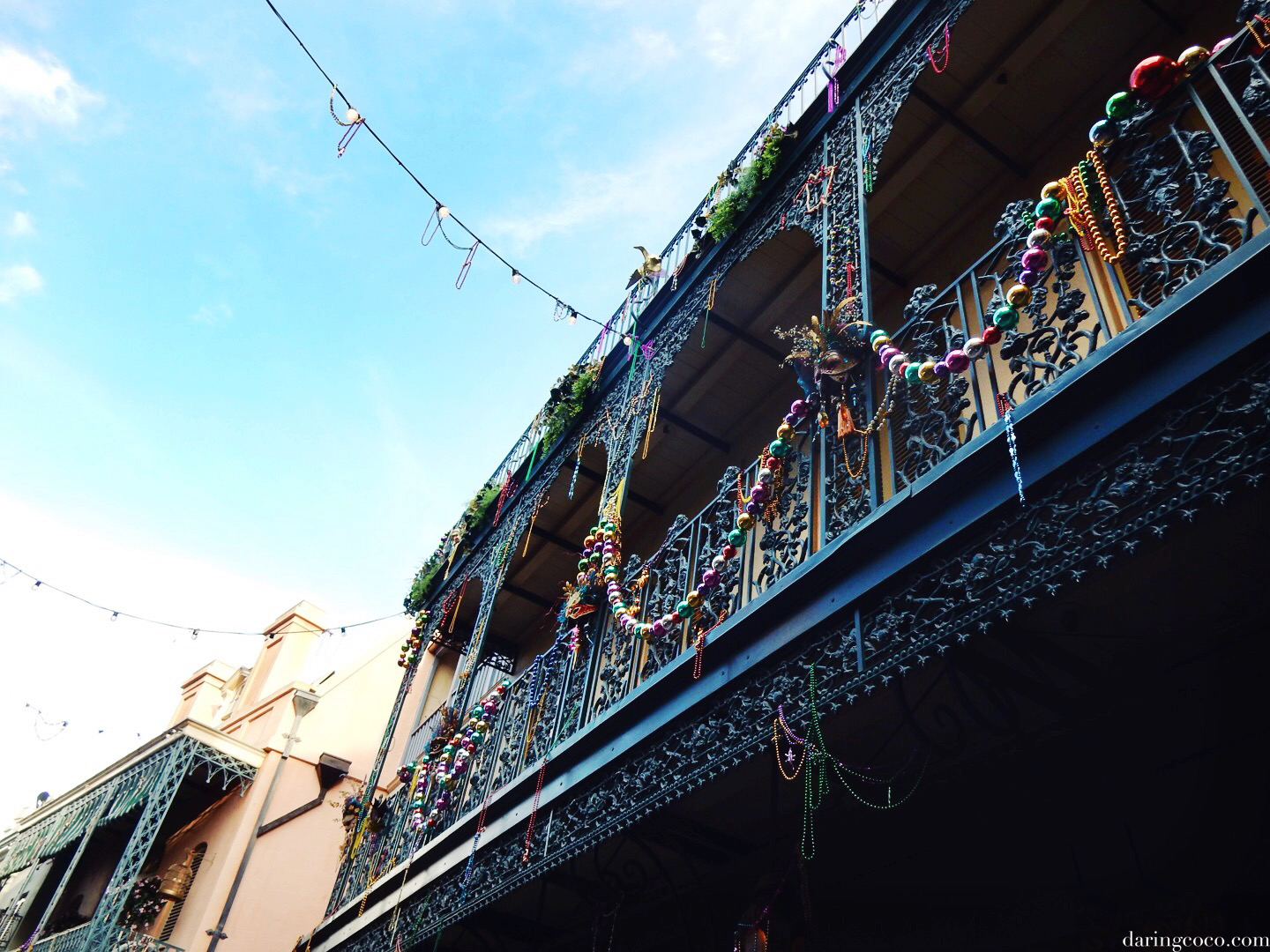 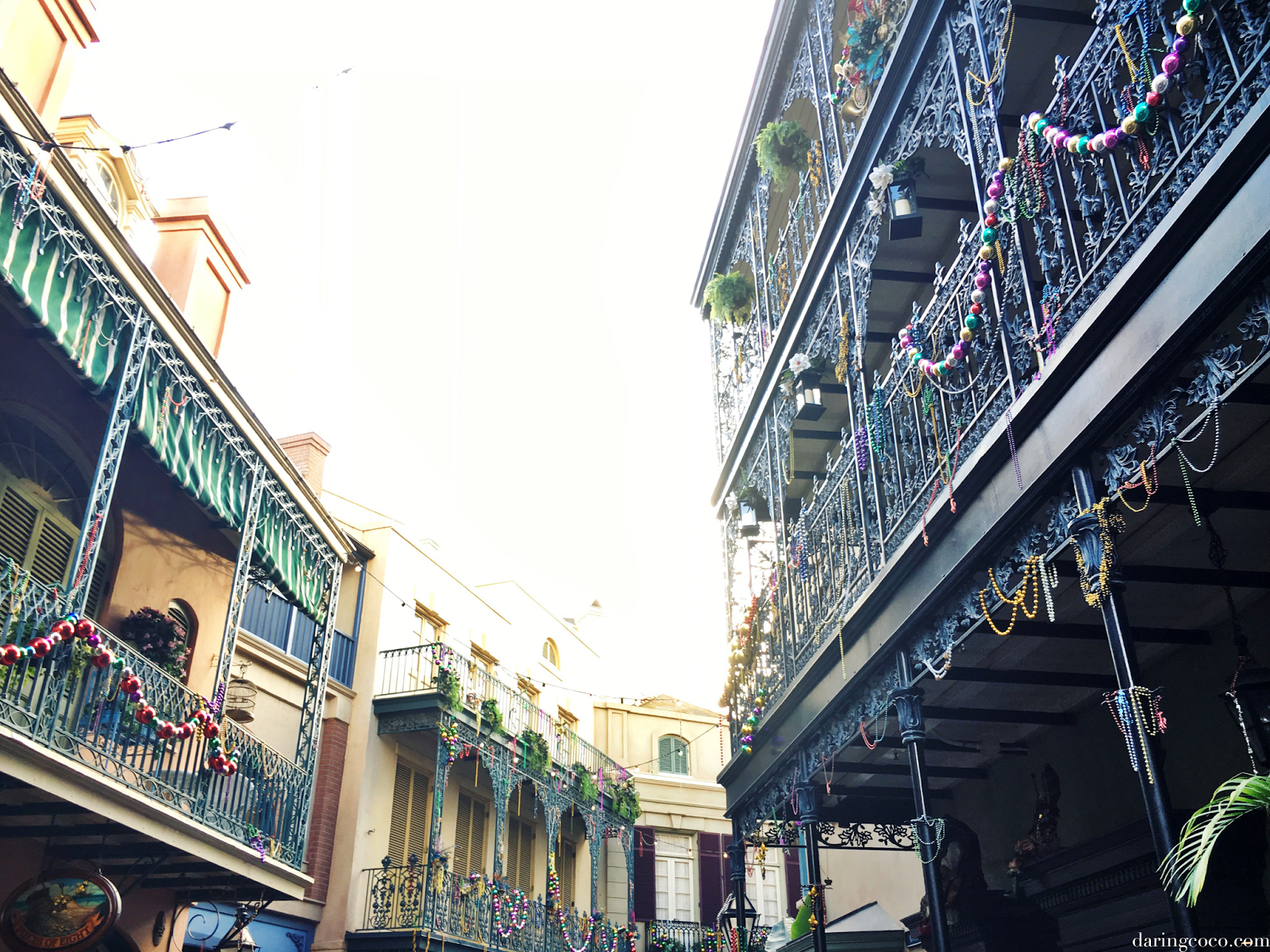 Out of all the various districts in Disneyland my favorite was New Orleans Square; perfectly modelled from its namesake. It truly felt like I was in the “deep south” of Louisiana, despite never actually setting foot in the “deep south”. From Mardi Gras themes and adornment to the Haunted Mansion estate. One that felt eerily similar to the mansion on American Horror Story, Coven. Mark Twain’s Riverboat was also equally captivating and full of romance. Though stepping aboard was slightly underwhelming. With all the elaborate grandeur on the outer, I expected to find just as much on the inside such as thick crimson velour seating and pin-tucked cushioning. Not an empty vessel with wooden floorboards. 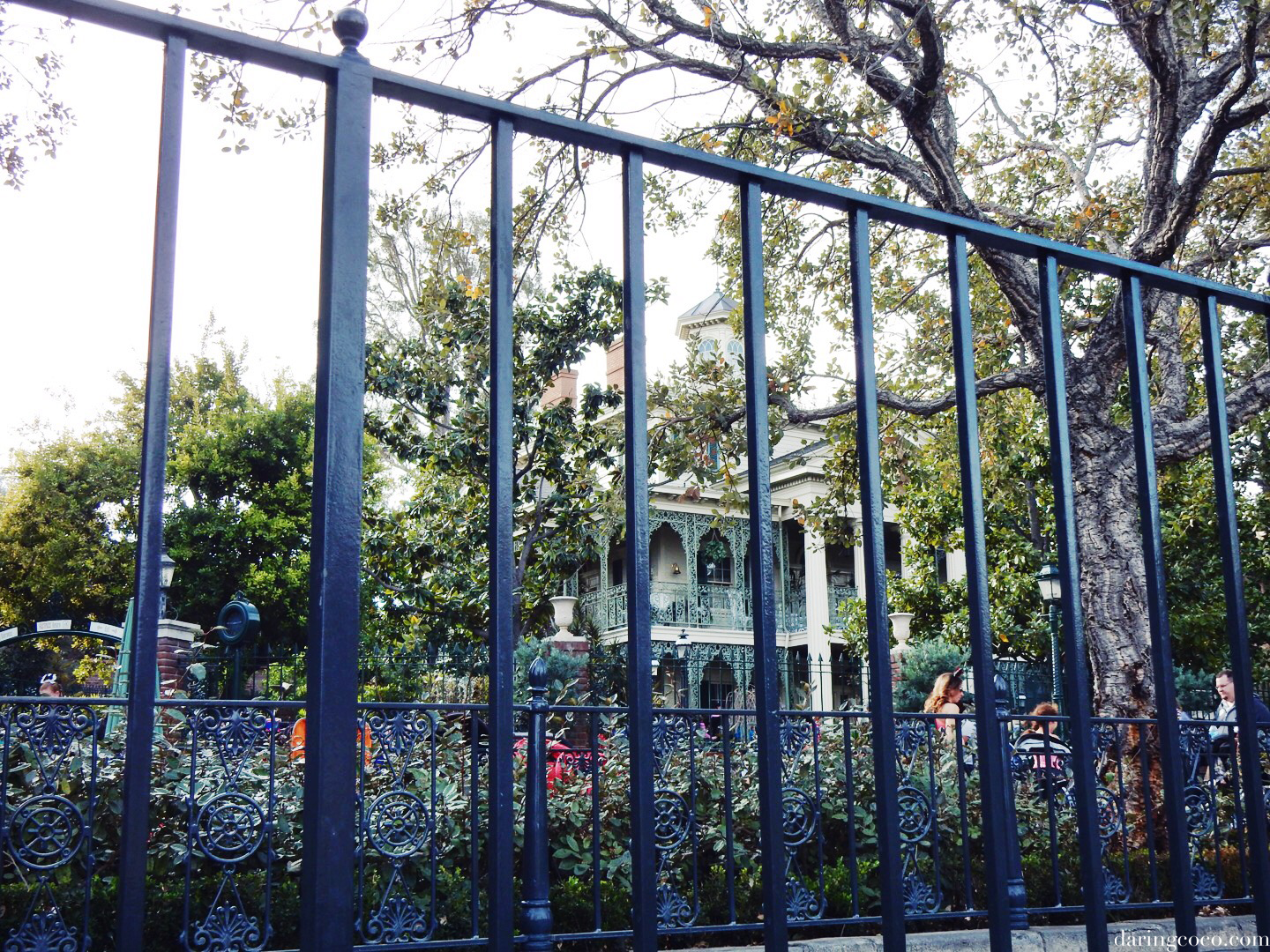 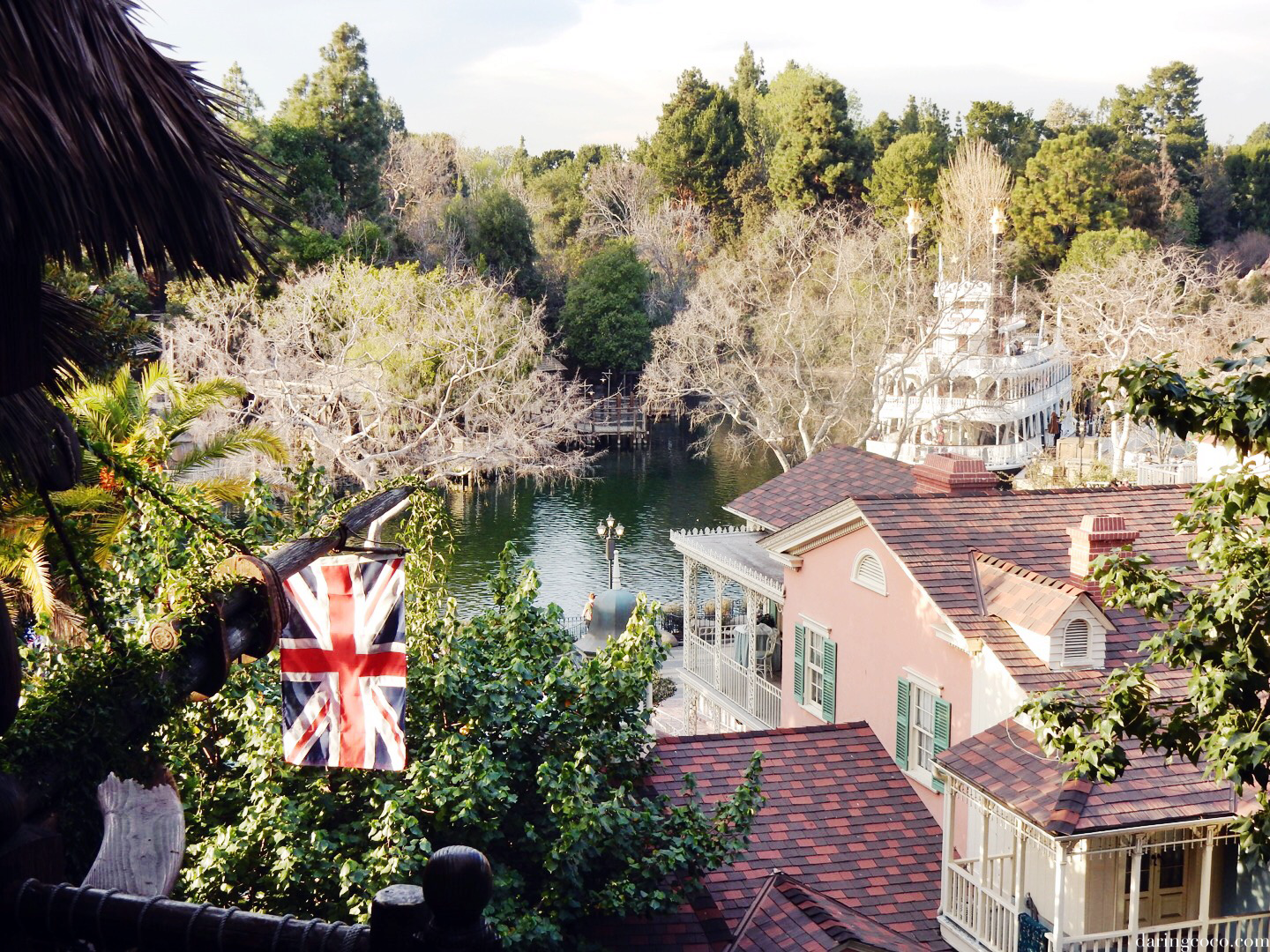 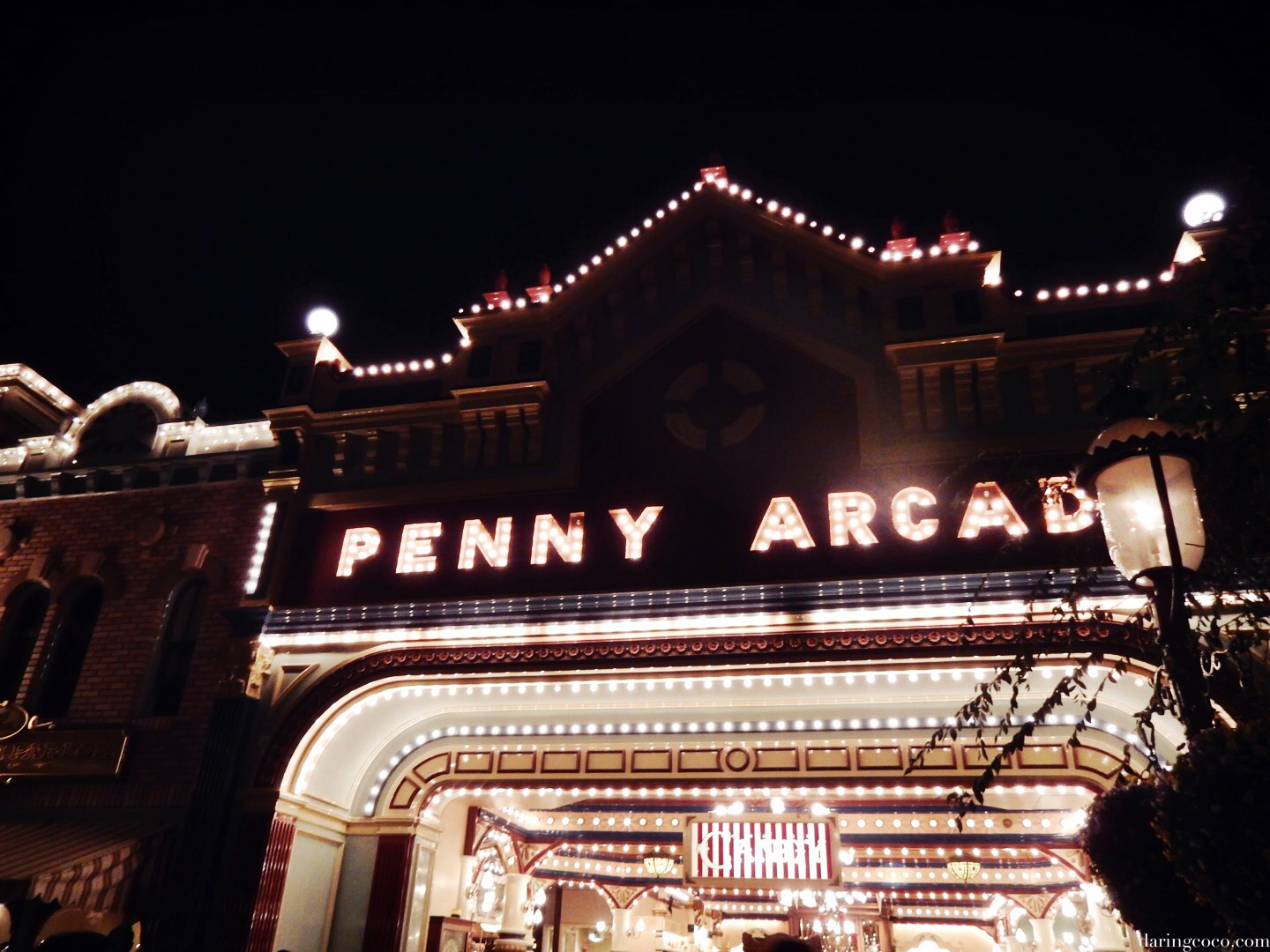 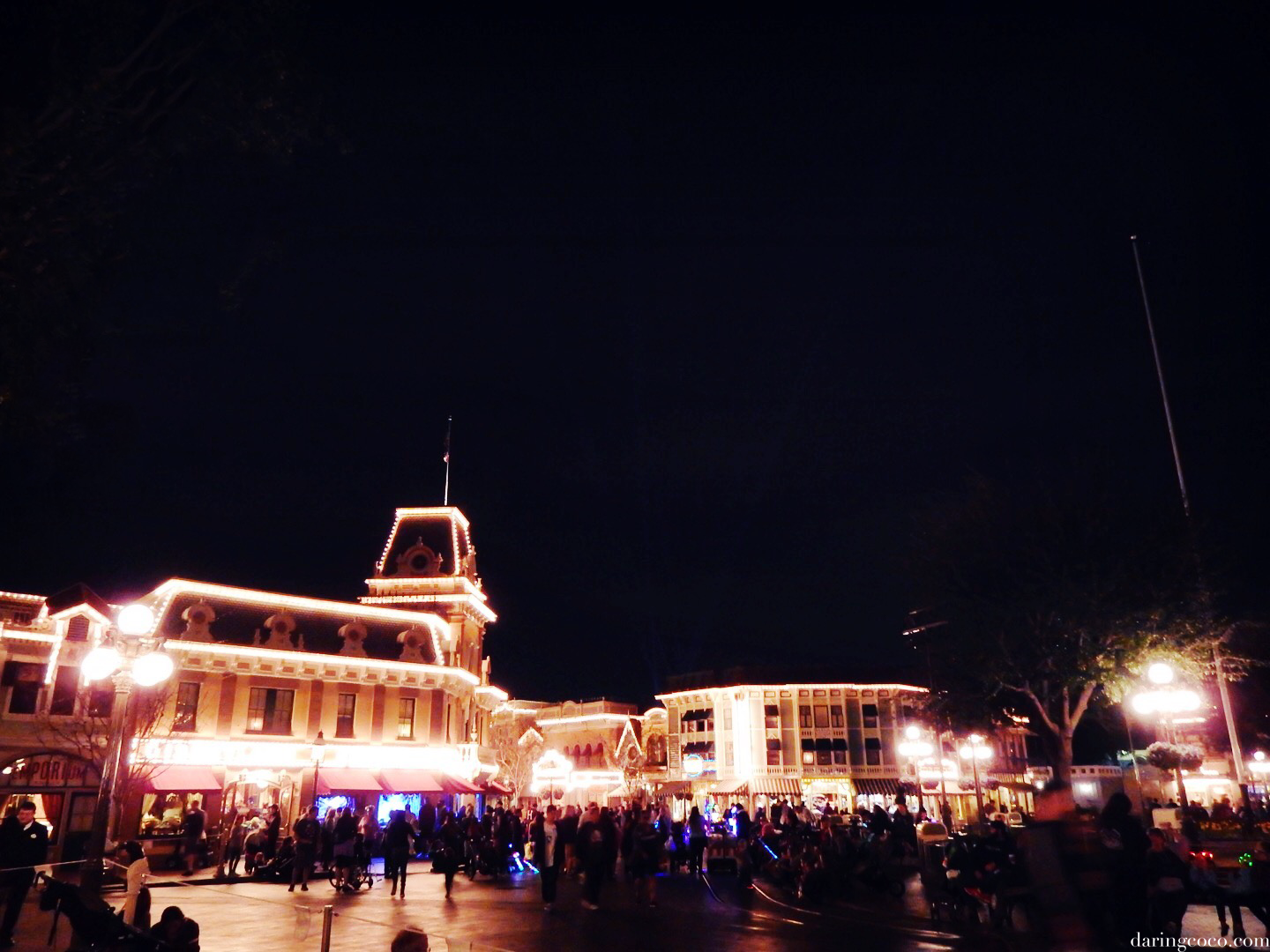 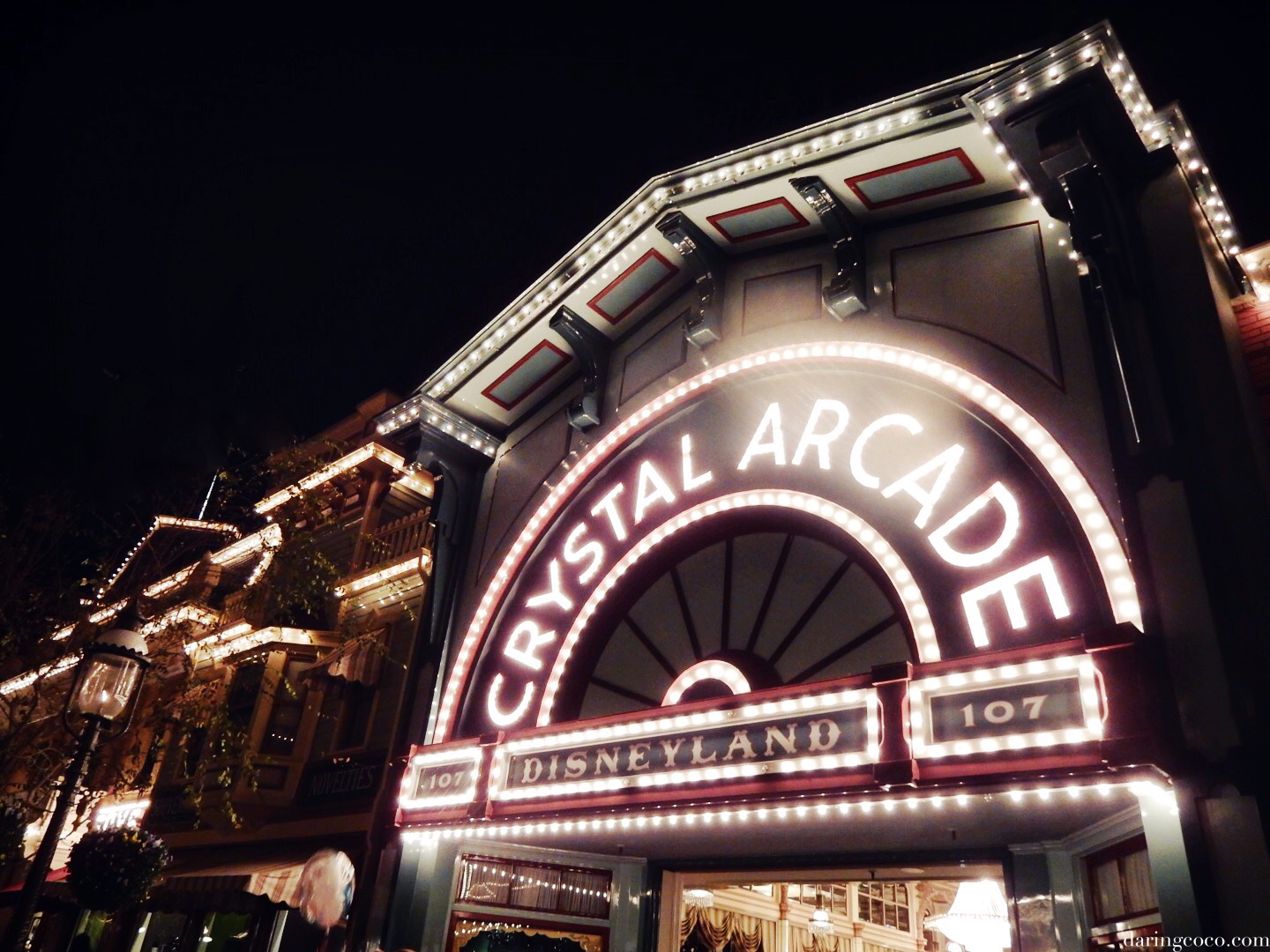 We decided against watching the parade and firework display at night. I’d personally previously experienced this so I didn’t feel obliged to go out of my way. However as this was the first time my travel companion had ever been to Disneyland I didn’t mind if we stayed. Thankfully she wasn’t too keen on seeing it either. I think the mass of people gathering on pavements is what put her off. I know it did for me. I remember experiencing the same in Hong Kong too. Those hoards of people “reserving” front row spots for the upcoming parade, most doing so hours before the show is set to begin. There isn’t much (if any) that annoyed me about Disneyland but this sure did. It’s bustling as it is without having groups of people blocking pathways and roadways. It turns into chaos as were suddenly condensed and packed liked tinned sardines for simply attempting to move around the main areas of the park. I can’t imagine how much of a nuisance it must be for the workers who are then stationed out on those streets directing and motioning the movement of park goers.

That said I’d highly recommend staying for the parade and fireworks. Especially if it’s your first time at such a place. They are exceptional and iconic after all.

The wait times on rides could also be ridiculous. Hour long waits become the norm from late morning onwards. There are “express passes” available though you can only claim one at a time. The idea is that you return back in one hour and take a seperate waiting line than the masses do. It works for most, however some were utterly pointless like Indiana Jones Adventure which saw us waiting for over two hours. Can’t imagine how long it would have been without that express pass though. One thing that did leave me impressed and yet another carefully thought out detail were the velcro sealable backpacks placed at the back of chairs on relevant rides. I thought these were ingenious for storing loose items like handbags, clothing or those damn ears which seemingly become a nuisance on turbulent rides. Though my faithful Rebecca Minkoff crossbody was rather ideal in situations such as these also.

I can’t help but feel a special connection to these parks. Especially in having experienced Hong Kong Disneyland within a few months of opening and now California’s 60th Diamond Anniversary. Though I think the same could be said for all of us really. Disney have been bringing perpetual joy to our screens since the thirties so it is natural for the majority of us to feel some form of adornment. It’s an undeniably whimsical experience. And one I don’t think I am capable of even imagining what it must be like for younger humans. I think we all need to experience this at least once in our lives because the park itself is the epitome of jubilation. It really is the happiest place on Earth and truly a place for young and old.