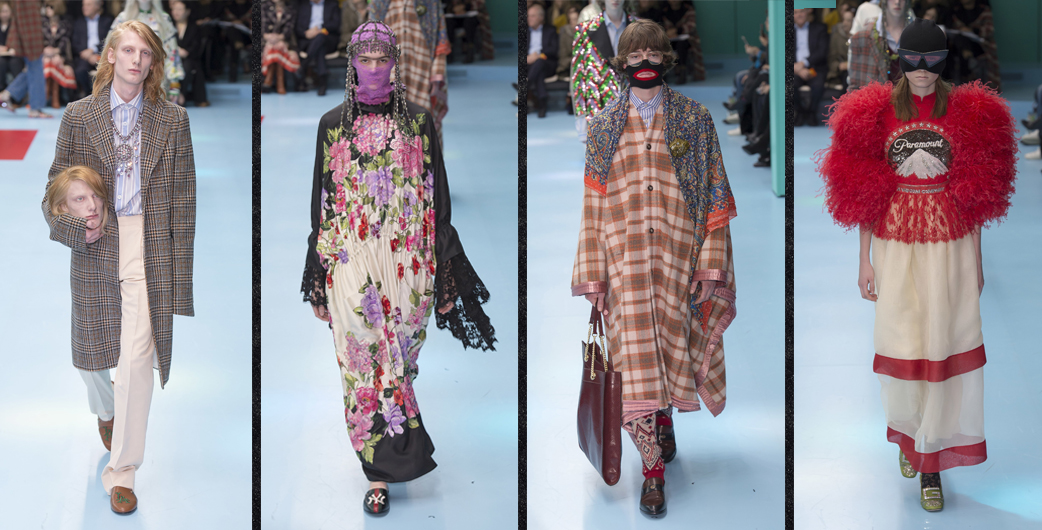 Another week down yet the controversy continues to stir over the Gucci Fall 18 ready to wear show. From unoriginal mockery over the perceived macabre tones to high praise for Alessandro Michele outdoing himself creatively yet again. Even Instagram jumped on the bandwagon and started a new challenge mimicking the use of fake severed heads. And with key fashion players like Anna Dello Russo joining in on the fun, the Gucci Fall 18 show continues to gain more notoriety day by day.

But as they say, it’s better to be talked about than forgotten.

Personally I adored this show. It was truly a beautiful mess of anarchistic theatrics. Headlining the Gucci Fall 18 runway were dragons, knitted bandanna’s sporting Gucci’s infamous playfulness in design and ostentatious body crystal pieces. And all in an West meets East twist, 80’s themes commingling with Russian style headdresses and Hollywood with Major League Baseball. It was an eclectic and eccentric hotpot of tradition and culture reimagined with sterile surfaces hosting as the ultimate setting. One which made for the ultimate backdrop to highlight the splay of exuberance in texture and pattern of the Gucci Fall 18 runway show. 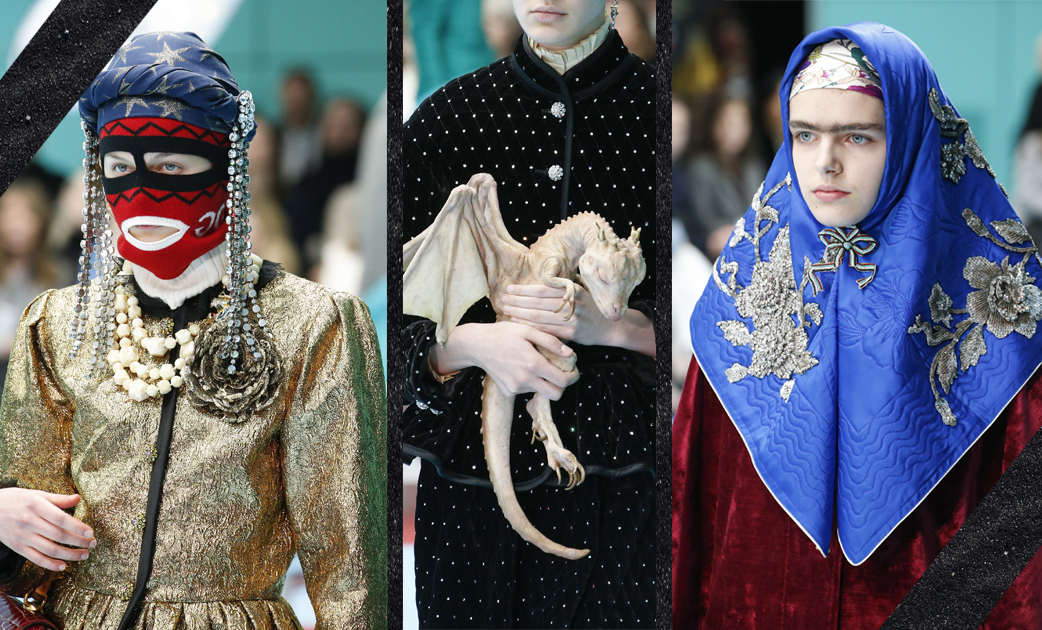 “we are the dr. frankenstein of our lives. there’s a clinical clarity about what i am doing. i was thinking of a space that represents the creative act. i wanted to represent the lab i have in my head. it’s physical work, like a surgeon’s.”
// alessandro michele, gucci fall 18 runway show

It wasn’t until the Gucci Fall 18 performance that I’d noted how I hadn’t been overly excited for a fashion show in the longest of times. And in part, this can be traced back to the late Alexander McQueen. A designer who continuously pushed the envelope in terms of convention and made unorthodox symbols mainstream; like the skull for example. The Gucci Fall 18 show was a production that beautifully resonated and and reminded me of McQueens past collections and his penchant for runway drama. Take his infamous armadillo platforms for example, a design from his very last collection, made even more iconic by Lady Gaga. And his successor Sarah Burton continuing on his legacy with her infamous honeycomb collection; one pointedly inspired by bees.

Runway shows of late have been safe and overly “pretty” and obnoxious in the mischievous sense with the abundance of fearless labels and designs. Grandiose productions in inconceivable locations, fantasy themes and genres like supermarkets making it slightly more eventful and progressive; yet only short lived. I’m craving controversy and conversation like Versace’s Fall 91 show. Dewy skin and wearable fashions is not a bad thing. It’s just I’ve become tired of “pretty” and our modernised standard of unattainable perfection. It is something we are perpetually inundated with and most of us simply need an escape from the need to curate and become that one-size-fits-all beauty mentality. I adored how Alessandro Michele turned the tables on our ideals on beauty; right on its head. What society condemns as idiosyncratic, such as a unibrow or androgyny, he glorified and emphasised with artistic appreciation. His creation and vision process is raw and intensely beautiful. And above all else, truly showcased the collection and what was on offer. As well as foster some much needed distinctive discussion.

//
You may also enjoy these articles: french blue  +  one on one