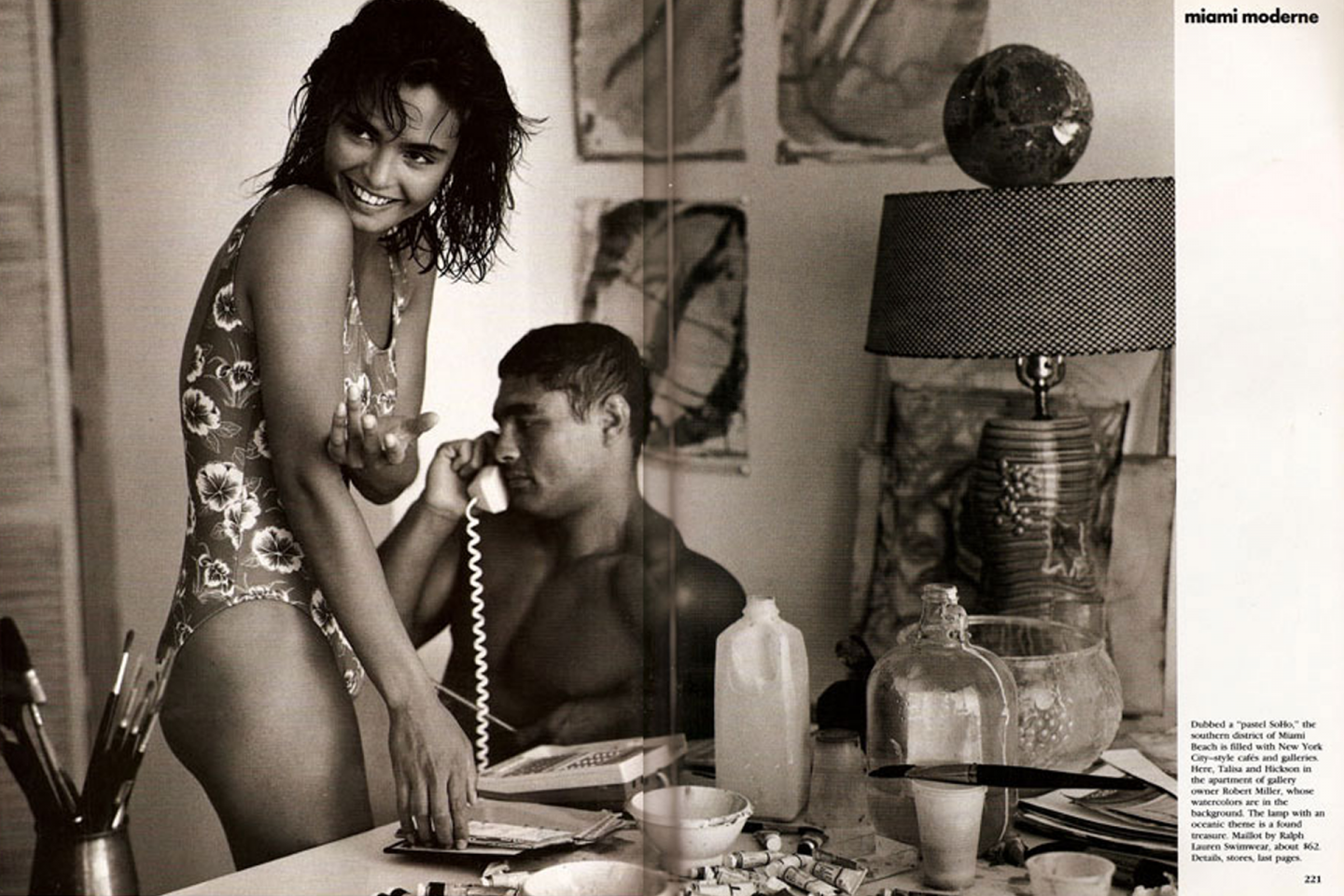 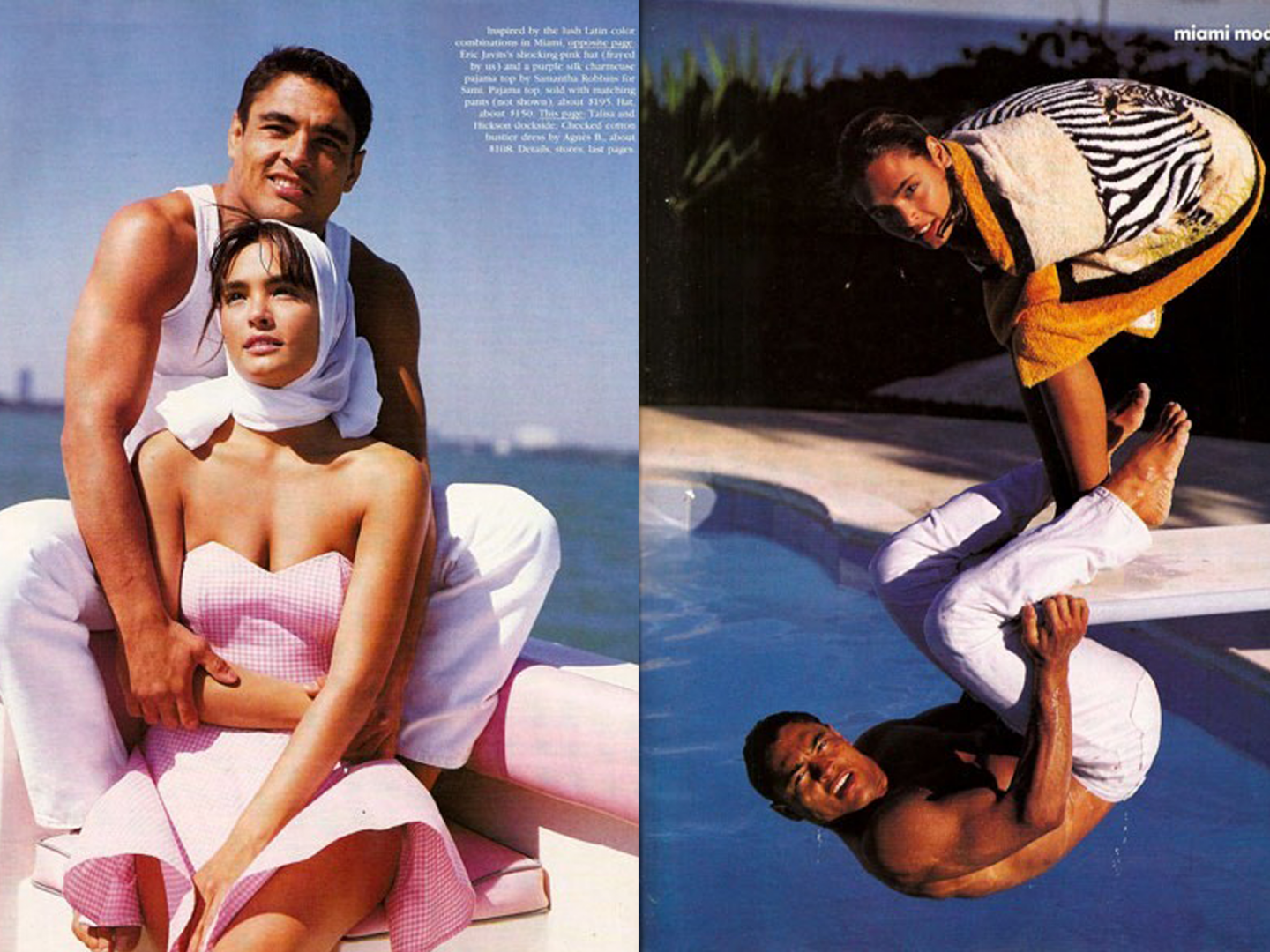 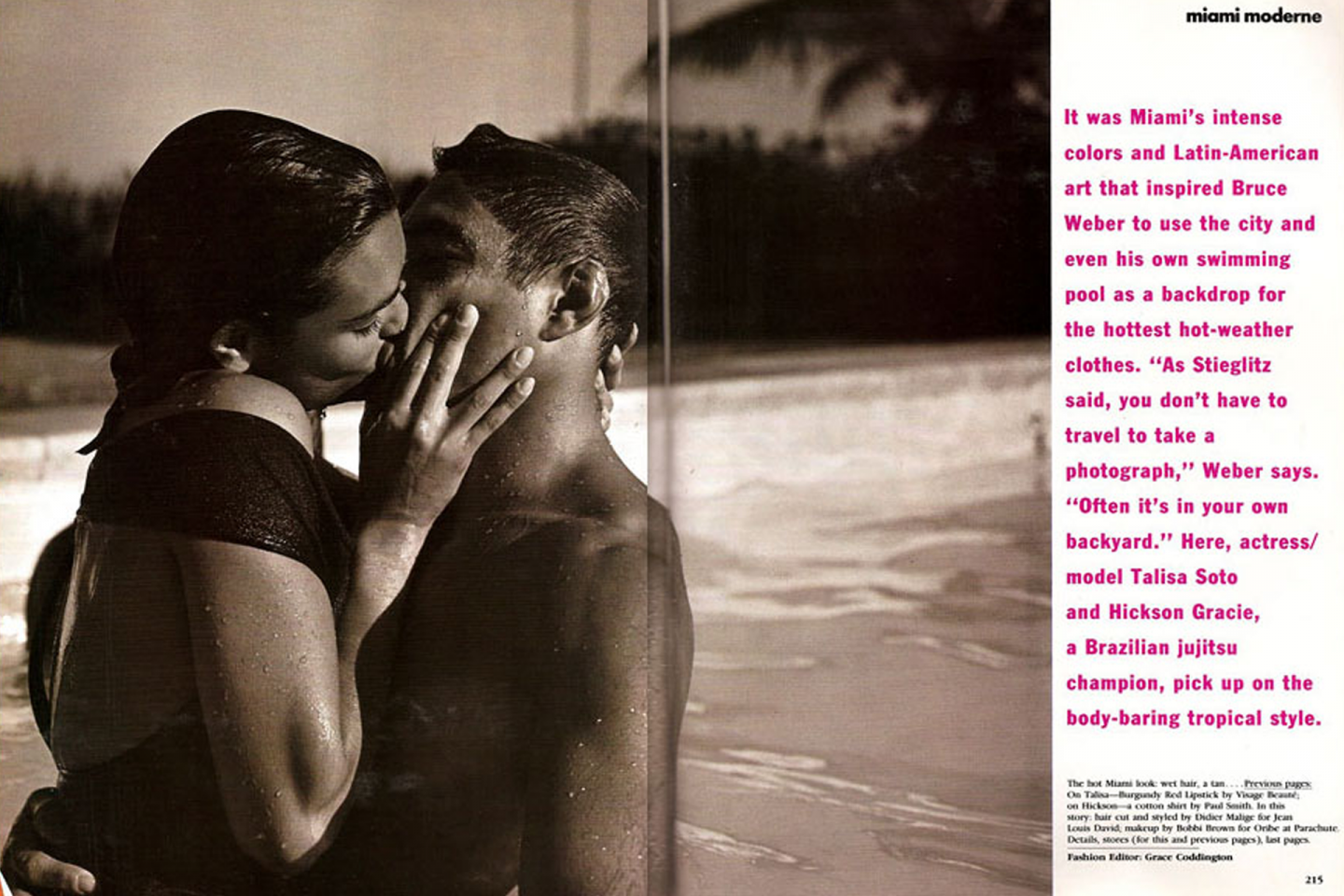 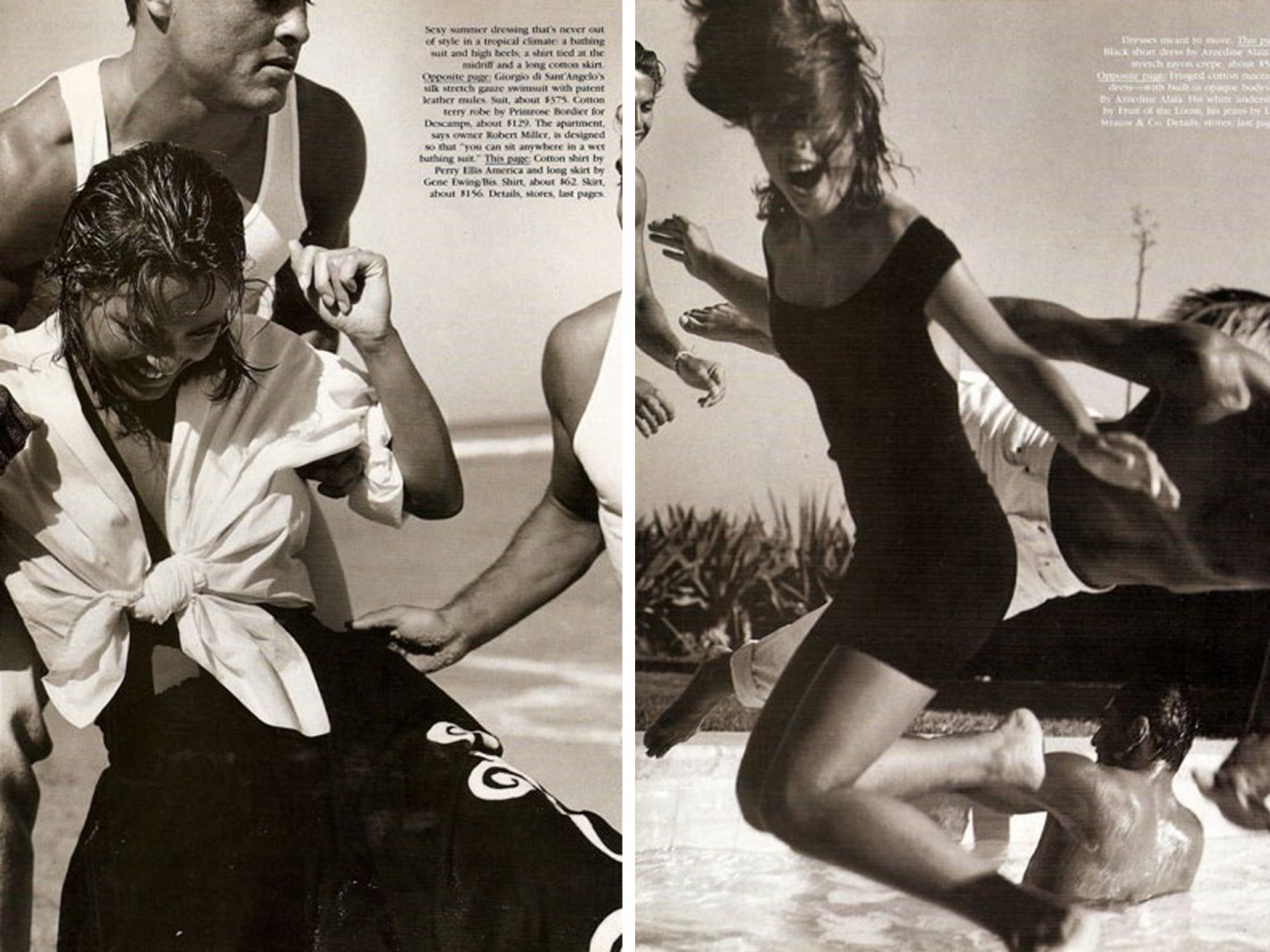 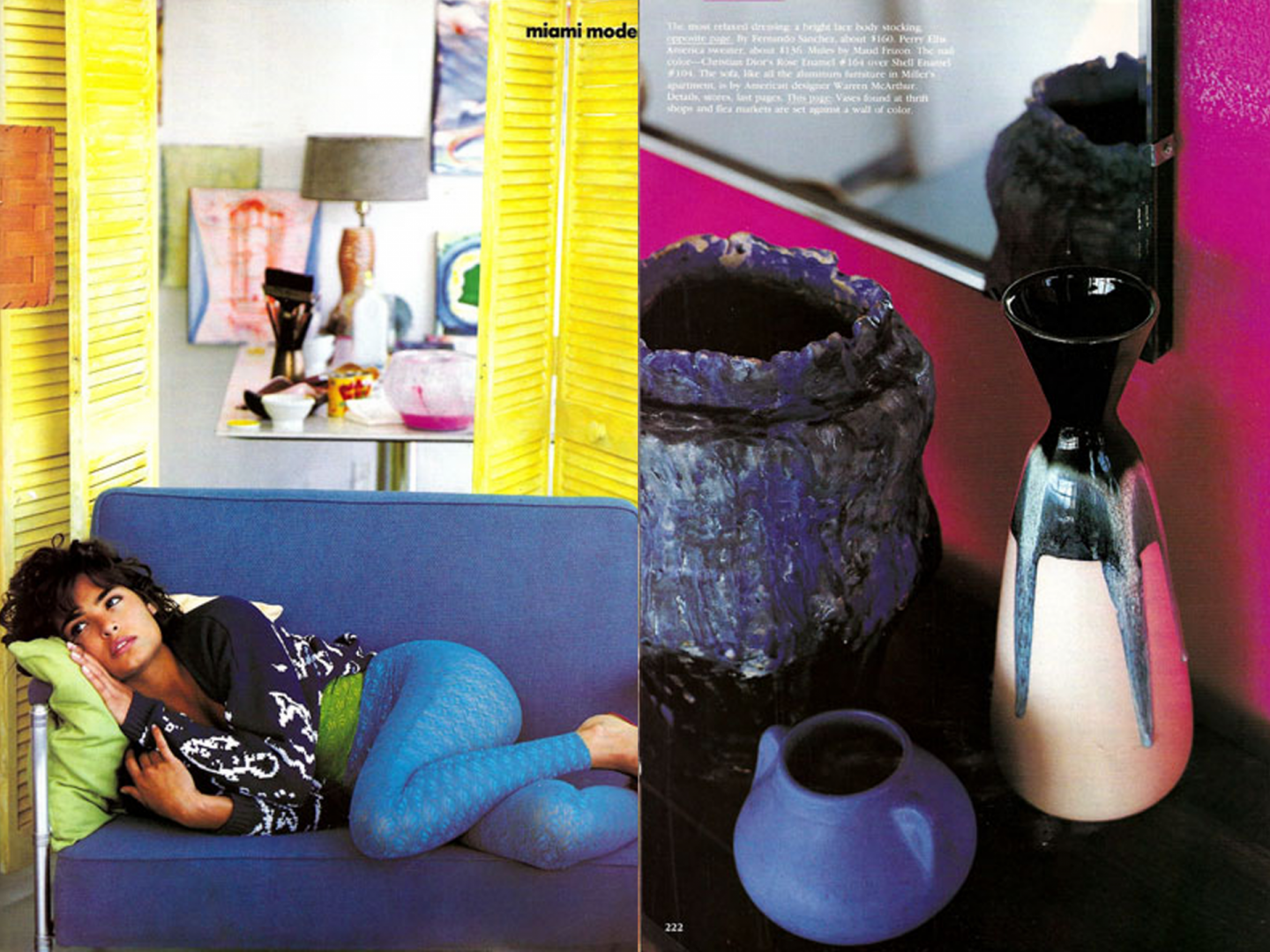 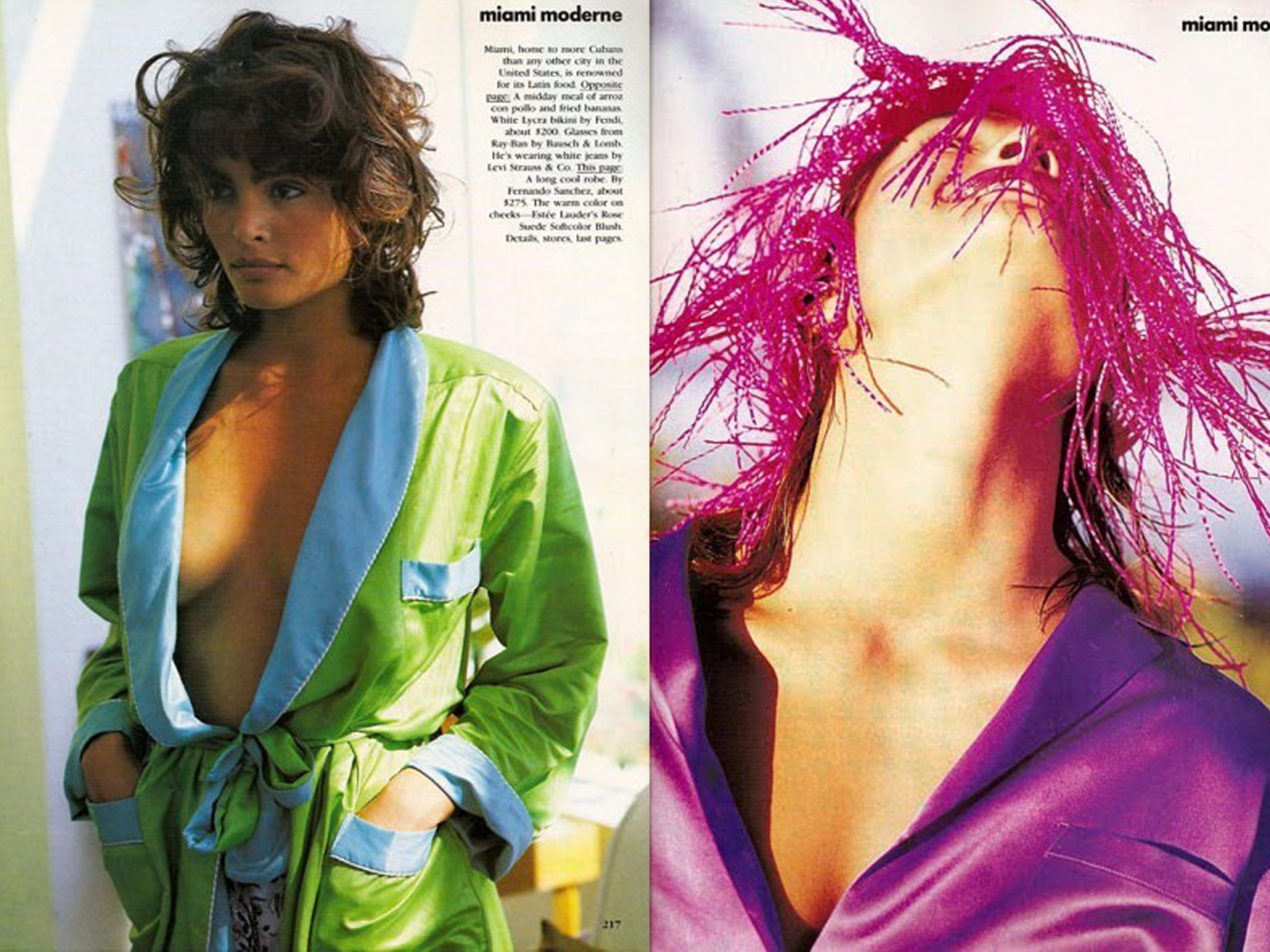 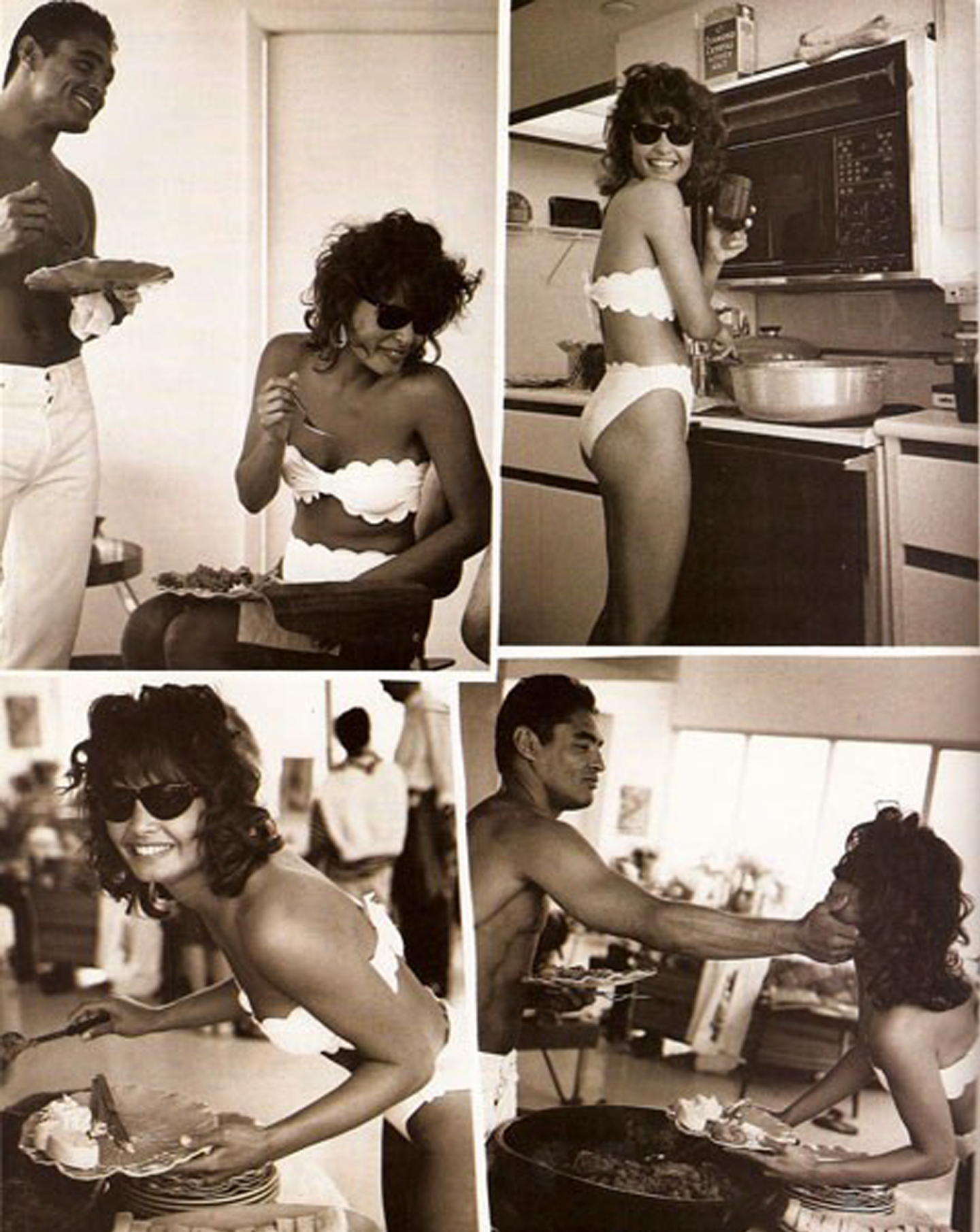 Talisa Soto and Hickson Gracie photographed by Bruce Weber and styled by Grace Coddington for the June 1989 issue of Vogue.

Finishing off an arduous week with some vibrantly sensual Miami heat. This Mucho Mas editorial is one to build that excitement and anticipation for warmer weather, and with neon tones for festival inspiration no less. However I want to steer this post in a different direction. When it comes to fashion magazines, to be honest, it has been quite some time since I last brought or even perused one. And it wasn’t until viewing this late eighties beauty again that I finally noted my overall subconscious reluctance towards them. One I supposed I didn’t truly know was in existence. I guess I could chalk it down to merely being time poor but more so to just being so heavily inundated and overwhelmed with visual inspiration and information. And as I stand back to edit this post, it saddens me deeply to have such feelings. Mostly because it is hardly a secret just how the magazine world has been fast in decline.

And I despise that I play a minuscule part of its overall problem.

When it comes to fashion magazines, this has always been a very much controversial industry. Especially when it came to promoting negative body image and for its lack of diversity. Can we say much has changed in recent times? I’ll leave that up to you to decide. For decades Vogue and Harpers Bazaar were such powerhouses. And they equally played an influential role in my life. As a young girl through to my teenage years I adored losing myself in those glossy fashion editorials; especially those vibrant photo essays like the Mucho Mas editorial. What began as a blasé way to pass time, promptly become an obsession with editorials and photography. And it all started in those dreary waiting rooms, lingering at doctors practices and following my mother into fashion stores. I chose to sit with those fashion magazines because I was far too shy to play in those dank corners with the other kids, all fighting over that one box of questionable toy odds and ends. What commenced as boring outings with mum, turned into pure but always hidden adulation in the opportunity to discover and devour a new magazine or two. And it was like winning the lottery when you encountered the rare edition of an overseas fashion magazine.

Fast forward to today and one is not hard pressed for accessibility to visual inspiration. Like the air we breathe, it now surrounds us, which can be a blessing but also a curse. That ease and effortlessness for more and more creatives to have their work seen and published is utterly liberating. No longer is such feats purely exclusive to the connected few. Because of this one’s reach has never had the capacity to be so broad and hold so much promise. And yet with such equitableness there are many imperfections. For me I feel as though the main one being how the magazine world is becoming redundant. And why wouldn’t it with such an abundance of dedicated apps and websites; who reaches for magazines anymore? Another negative is constant creative burnout and the intense scrutiny and responsibility placed on creatives. What started off as a harmless but dignified term, the word “Influencer” is now a tarnished label. Originality is becoming scarce and there are far too many blurred lines when it comes to disclosing sponsored posting. And when it comes to art, plagiarism is an all too common practice with a number of reproduced artworks and photography used without permission by larger fashion chains. Even peoples tweets are being stolen and claimed by other users. This is a world where it can be uncomplicated to be seen yet majorly complicated also. After all anyone can become “Internet famous” when cash is king.

Content has never been produced and viewed en masse as it has today, causing an overwhelm of inspiration and information. And it’s the kind that gets archived and simply abandoned within moments. Take Instagram for example, one will spend countless hours creating a post with a heavy emphasis on editing. A post with so much thought, care and imagination born with a limited life span. Born into a world of prompt likes then essentially forgotten then lost in your feed after a week or less. And that’s if an algorithm plays nice to begin with. People are churning out brilliant works of art and words only to have them replaced by something “new” and “shiny” within moments. Regardless of how outstanding, how many likes or clicks that image receives, it will be forgotten and replaced faster then the last password you created. Which is extremely disheartening considering how much time and effort is made behind the scenes towards a piece that will only receive a few seconds of glory. Let’s not forget how the extraordinary amount of pressure to create an endless amount of content is astounding.

Is this truly the end result we want when we create?

This is not to say that editorials of the past are not archived either. There are those that perpetually linger on one’s mind, called upon for future reference. Like this Mucho Mas editorial or my own personal favourite, High Life. Can we say the same for what we post on social media? Unpopular opinion but I don’t believe Pinterest is an ideal modern day replacement. Again more likely than not, ninety percent of what you pin gets buried in an archive dependent on the loading speeds of your browser. There’s also the issue of due credit given to the appropriate party with broken links and edited captions. Gone are the days were we collected and curated photography and visuals that inspire like this Mucho Mas editorial. During those golden ages of glossy magazines, they saw us hoarding and cherishing; physically and mentally making notes and returning back to them for inspiration or for a stint of daydreaming. But is there a place for fashion magazines in this world? I’ve always felt like magazines and books are the proverbial grandfather of the creative industry and a bench-mark for creative standards. Let’s not forget the humans such an industry employs. So can anything really be salvaged in an ever changing social and visual landscape? Or will fashion magazines simply be a casualty of modern day progression?

I personally hope not.